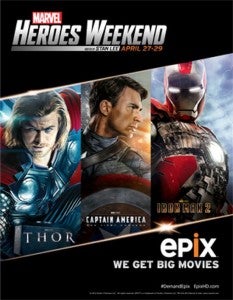 As the Avengers movie May 4 release date grows closer, fans can expect more tie-ins to the movie. EPIX has just that they will be airing Marvel Heroes Weekend from April 27 through April 29. The Marvel Heroes Weekend will include a marathon of Marvel superhero movies including Iron Man 2, Thor, and  the world television premiere of Captain America: The First Avenger.

The marathon will be hosted by none other than Stan Lee and will also include the EPIX Original Documentary With Great Power: The Stan Lee Story. In addition, EPIX will also air EPIX Extra: Mighty Movie Superheroes, which examines the origins and fan following of the mighty team.

The EPIX Original Documentary With Great Power: The Stan Lee Story tells the story of the life and creations of Stan Lee, the co-creator of Spider-Man, Captain America, Hulk, X-Men, Fantastic Four, Iron Man and over 200 other characters.

“These action-packed superhero films are some of the most highly viewed titles among EPIX audiences across all platforms,” said EPIX CEO and President Mark Greenberg.  “We’re excited to give fans more access than ever before to the mastermind behind it all, Stan Lee.”

The Marvel Heroes Weekend will be part of a free preview of EPIX for all subscribers of affiliate partners, which will also showcase Hollywood blockbusters Transformers: Dark of the Moon, Rango, Conan the Barbarian, True Grit, The Lincoln Lawyer and more. EPIX is also doing a national contest which will send winners to the Hollywood premiere of The Avengers. More info on the contest will be available at the EPIX Facebook page at www.facebook.com/EpixHD.  Additionally, EPIX has partnered with Clear Channel Media and Entertainment for Avengers-themed sweepstakes promoted across Ryan Seacrest’s nationally syndicated radio shows and website and across several local Clear Channel stations in the top 10 media markets.