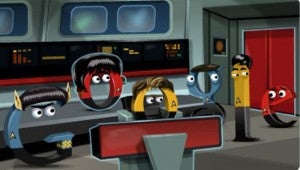 It’s been a Star Trek kind of day today. To celebrate the 46th anniversary of Star Trek, Google unveiled an interactive Star Trek Google Doodle on their home page.

Also, the title of the upcoming Star Trek sequel has been revealed. ComingSoon.net reports that they’ve been told that Star Trek Into Darkness will be the title for the Star Trek sequel from J.J. Abrams. To back up their claim, they point to two domains www.startrekintodarkness.com and www.startrekintodarknessmovie.com, which have been registered through the domain registry service that Paramount Pictures uses.

Paramount Pictures has yet to officially confirm the news, but a number of other sites are now also supporting ComingSoon.net’s report on the new title. Star Trek Into Darkness is set to be released on May 17, 2013.

Star Trek Into Darkness Is Title For Star Trek Sequel