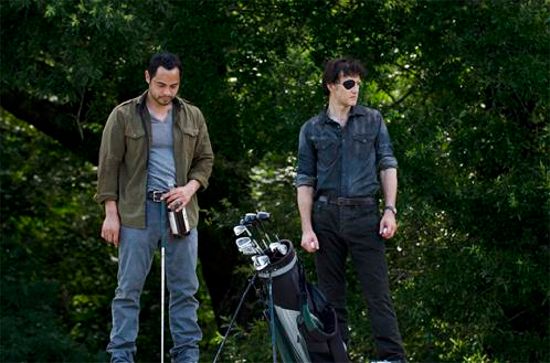 The “Dead Weight” episode of The Walking Dead opens with The Governor washing his shirts and Megan studying a chess board. The Governor is telling Megan that she needs to go ahead and make a move.

Then, the scene flashes back to the pit scene from the “Live Bait” episode. Martinez is looking down at The Governor and Megan in the pit. Martinez hands his weapon to someone named Mitch, and he helps Megan out of the pit. Then, Martinez throws down a rope for The Governor to use to climb out.

Back at the pit, Lilly yells out asking Brian if he’s ok. Realizing that The Governor is using a fake name, Martinez gives The Governor a glance over.

Back at the chess game, Megan has grown quiet. Megan asks The Governor if she is bad. When The Governor asks why she would think that, Megan says that her dad was always mean to her.

The Governor and Lilly are inside a rundown camper. Lilly asks The Governor if he is going out, and The Governor says he’s going on a supply run with Martinez and brothers Pete and Mitch. The Governor apologizes and says he wants something better for them, but Lilly insists the camp is good.

As The Governor goes on a supply run with Martinez, Pete, and Mitch, Mitch warns “one eye bri” that he better watch his step. The group is looking for a survivalist cabin that supposedly has a lot of supplies. The Governor notices something in the woods, and he draws his gun. The other men follow The Governor to a tree, which has a headless body tied to it with a sign around its neck that says “Liar.”

Back at the camp, Lily is bandaging up the hand of a woman names Elisha. Tara flirts with Elisha, asking if she was in the Marines, but Elisha replies that she was Army reserve. Tara tells Elisha that her M-4 is great for combat, but not good as a field weapon. Tara says she’s never been into big guns that she’s more of a Smith & Wesson gal. Elisha asks Tara if she’s always been that full of s***.

Martinez and his group finally reach the survivalist cabin. Outside the cabin, they come across another headless body, which has a “rapist” sign hanging around its neck. As they reach the cabin, Martinez’s group finds another body on the porch with a “murderer” sign. They think it’s the survivalist who took himself out after killing the other guys they found. The Governor reaches down and picks up a picture that the man was holding of himself with his wife and kid.

As they open the door to the cabin, they hear something moving around inside, which they assume is a walker. As the men quietly, creep around the house with flashlights, they hear the noise growing closer.  A walker jumps out and grabs Pete, but The Governor quickly takes the walker out. As Pete struggles to get up off the floor, he sees the walker heads of the headless men they found outside. Mitch is distracted by the heads, and another walker grabs him from behind. The Governor also takes out the second walker.

Later that night, as the men sit around a fire, Martinez is alone with the Governor. Martinez tells The Governor that if it had been just him in the pit that he wouldn’t have brought him into the camp. Martinez says that because the Governor was with the little girl that he seemed different and changed. Martinez asks The Governor if he really is changed, and The Governor says he is.

Lilly and Megan come home to the camper later that night, and The Governor is shaking. When Lilly asks what is wrong, The Governor says he 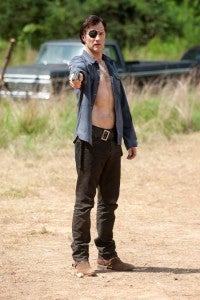 just had a bad dream, but he can’t remember what it was.

The next morning, Mitch has called a meeting at the camp. Mitch says that they found what was left of Martinez in a walker pit. Mitch thinks Martinez got drunk and fell in the pit by accident. Pete declares himself the new leader of the camp. Some of the camp members object, including Tara. Mitch yells at Tara to shut-up, but Pete tells everyone to calm down. Pete tells everyone that his leadership will be temporary, and they will find a way to do a vote in the next couple of days.

Pete and Mitch take The Governor out on a hunt. Pete tells The Governor that he could use some help leading. Mitch spots a camp, which is loaded with supplies. When Pete suggests that maybe they should take the campers in, Mitch says that they should just take their supplies. Mitch and Pete leave, but The Governor continues to watch the camp.

Later that day, Mitch is still complaining to Pete about not taking the supplies. The Governor hears something and walks off, and Mitch and Pete follow him. They come across the camp from before and all the people have been killed. The Governor says it was people and not walkers that did this. Mitch is mad that some other group has their supplies. One of the men is still alive and starting to come around, but Mitch stabs him in the head.

As The Governor tries to drive away with Lilly, Megan, Tara, and Elisha, they come across a bunch of walkers stuck in the mud in the middle of the road. The Governor looks back at the others as if he realizes that it is too dangerous for them to go at it alone.

The next morning, Lilly wakes up back in the camper. The Governor is getting ready to go out. When Lilly asks The Governor what he is doing, he replies, “Surviving.” The Governor knocks on the door to Pete’s camper and tells him that they need to talk about Mitch. When Pete turns his back to walk back inside, The Governor stabs him in the back and kills him.

Mitch asks The Governor what they are going to tell the camp about Pete, and The Governor says that they will tell them he died on a supply run saving them. The Governor reassures Mitch that everyone loves a hero. The Governor takes Pete’s body, weighs it down with chains, and tosses it into a nearby pond.

The Governor is now running the camp, setting up a perimeter and telling people they need to conserve their ammo. The Governor warns everyone else in the camp to avoid strangers.

Tara and Megan are outside playing tag, while The Governor cleans his injured eye inside. Lilly comes inside and looks at The Governor and tells him that he doesn’t have to do this alone.

Outside, Megan thinks that she spots Tara hiding behind some clothes on a clothesline, but it turns out to be a walker. Megan runs away and tries to hide under a camper, but the walker grabs her leg. Tara tries to pull the walker away but her hands can’t hold onto the walker’s bloody leg. As Megan screams, The Governor comes out at the last moment and shoots the walker in the head. Lilly rushes over to comfort Megan.

The Governor is looking out across the pond. He then turns and looks down, where walker Pete can be seen chained below the surface. Walker Pete is reaching up trying to get free to the surface.

The Governor is driving a beat-up truck through the woods, when he stops to get out to walk. He’s in the woods outside the prison, looking at Rick and Carl. He pulls out his gun and looks at it. The Governor keeps wandering around in the woods, when he spies Hershel and Michonne outside the prison in their jeep. When The Gorvenor sees Michonne smiling, he points his gun at them. The scene fades to black.