What would Watchmen's Doctor Manhattan be like if he were dealing with clinical depression, unable to fully control his powers, and sidelined by disinterested bureaucrats?

What if, lacking the intellectual curiosity (or perhaps the ability? Or both?) that led Jon Osterman to discover and create other universes, our impotent and sullen god instead sought an escape from life altogether?

That is the starting point for Eternity Girl, the latest Young Animal launch. Writer Magdalene Visaggio, artist Sonny Lieu, colorist Chris Chuckry, and letterer Todd Klein have crafted a first issue that is not only DC's best new series of 2018 so far, but introduces a character in Chrysalis who shares some DNA with, but is more relatable and emotionally real than, Moore and Gibbons's atomic man.

That is, of course, no slight to Watchmen: it is by design. Where Moore and Gibbons chose to view Doctor Manhattan at a remove, Caroline Sharp is a character who is intimate and in-your-face. Her interior monologue is not about the fate of the world, but about her own problems and the lack of easy answers for same.

Sharp comes complete with a backstory that feels more like Alias than Doom Patrol: a former B-list superhero, she has been forcibly retired by the government black-ops squadron that employed her after a workplace incident that left a co-worker severely injured.

Without day-to-day responsibilities, her powers seem pointless, and without a meaningful direction for her life, Sharp fills her time with suicide attempts that she knows to be ultimately fruitless, since she is immortal. The first issue sets the stage for the rest of the story by introducing a potential "solution" for this problem which feels, to the reader, less like a breakthrough and more like a psychotic break. 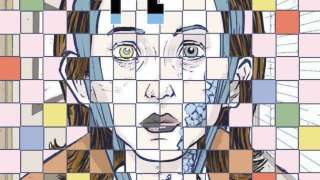 The series' inspirations and the superhero tropes that inspire it are many and varied; just when a reader might think, "oh, I get it -- this is a riff on..." something happens in the narrative that subverts the end of that sentence, or perhaps adds a new ingredient to the mix entirely.

Caroline's power set calls back to Doctor Manhattan's intrinsic field, as do her matter-reshaping abilities. Her tragedy -- that she wants to die, but cannot, like a god who can will anything at all into reality except her own end -- mirrors what Geoff Johns did with Hank Henshaw, the Cyborg Superman, during his time as a Green Lantern villain. As noted, her PTSD and underground superhero status is evocative of Jessica Jones's Brian Michael Bendis-helmed reinvention.

The first issue deals with loss, rejection, hopelessness, and a loss of identity -- that last one made literal when Caroline can seemingly do anything except hold her own appearance in place -- all in the space of 20 pages, but never feels rushed or crowded.

This is helped along by Liew's creative page layouts and clean lines -- a more photorealistic artist would likely have cluttered the page with cross-hatching, complicating things too much -- and Chuckry's colors, which are noticeable only when the script calls for them to be. There is a look of sterility, of cleanliness and order, to the comic which throws our heroine's disordered soul into sharper relief.

Todd Klein, a veteran letterer and one of the industry's standards for so long he sometimes does not get the credit he deserves, delivers here, with a strong, simple approach that calls attention to itself only a few times, when the story gets particularly emotional or hallucinogenic.

Of course, her inhuman concerns are just larger-than-life riffs on what everyone faces. Her inability to "hold herself together" and maintain her human appearance for long periods of time can be seen as an acknowledgment of how difficult it is to keep up an acceptable public face when you are depressed. And while her work relationship is with a black-ops group that employs superhumans, the frustration she faces at work, when stripped of its artifice, is familiar to nearly everyone who has ever held a job.

"All they want is for me to be a totally functional human being capable of reliably operating at superhuman capacity indefinitely," Sharp says of her bosses. "What's so hard about that?"

Review: 'Eternity Girl' #1 Is a Heartbreaking Work of Art