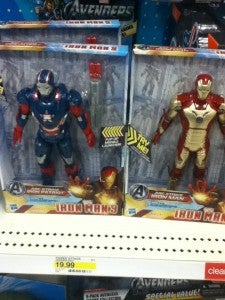 The first official Iron Man 3 merchandise is beginning to appear on store shelves, with 10" "Arc Strike" action figures based on Iron Man and War Machine/Iron Patriot spotted by Twitter user Armageddon26 and posted by Comic Book Movie. The figures, reportedly available at Target and KMart stores, are detailed figures with numerous points of articulation and lights that come to life at key spots in the figure (such as the armor's eyes, the arc reactor in its chest and the pulse emitters in the hands). By the look of the photo at left, the figures will run you $19.99 each, and it's worth noting that the Iron Patriot moniker is official--apparently that's not just a fresh coat of paint for War Machine. Filmmakers have said as much before, but in a number of interviews, actor Don Cheadle has continued to refer to his character as War Machine, leading to some speculation as to what he might be called in the film. In the comics, of course, the part of Iron Patriot was played by Norman Osborn, the Green Goblin; when the armor first appeared in set photos, it appeared to paparazzi that it was in fact James Badge Dale wearing the costume, leading to rumors that Iron Patriot would be a villain in the film. The background of the packaging also shows off what CBM is speculating could be a first look at Tony Stark's new Hall of Armor after the first one is destroyed (as seen in trailers and promotional images). Whether that's the case or if they're just using Photoshop to make the old one look new for the purpose of creating attractive packaging is something we'll likely have to wait until the movie is out to know for sure. Iron Man 3 will be in theaters on May 3.