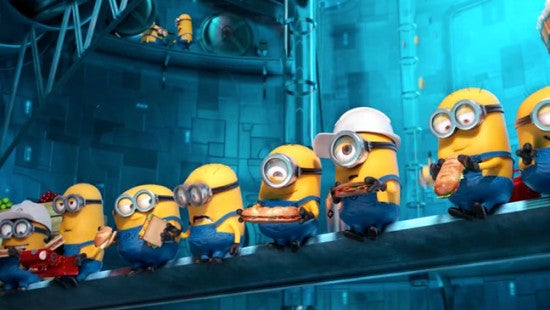 , the Universal Pictures/Illumination Entertainment sequel that was projected by many box office analysts to top out at around $500 million at the global box office, will nearly double that, as the studios announced today that the film has grossed $900 million worldwide. That still can't match up to Iron Man 3's $1.2 billion, but it's a solid #2 for the year, with Man of Steel ($662 million) a distant third with about as much space between it and Despicable Me 2 as is between the top two pictures. It's also second--all-time, not this year--in the number of territories where it's opened at #1, with 67, according to Deadline. That means it's dominated everywhere it's been more than any movie this side of Jurassic Park. Despicable Me 2 is also the 5th highest-grossing animated feature film of all time worldwide and the 6th highest-grossing animated film of all time at the overseas box office. It's also the only movie released theatrically in 2012 or 2013 which made more than $300 million and originated as a movie. All of the other $300 million-plus earners--The Hobbit: An Unexpected Journey, Skyfall, The Hunger Games, The Dark Knight Rises, The Avengers, Iron Man 3 and Man of Steel--originated as comics or novels. Only one other movie--Pixar's Monsters University--has even cleared $250 million domestically as a made-for-cinema concept. A third film in the franchise--a prequel that revolves around Gru's minions (seen above), is coming in 2015. That film will see Steve Carell (at least for now) exit the franchise, replaced by Sandra Bullock.