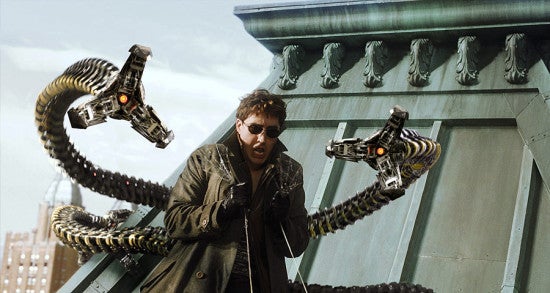 Just hours after some fans had begun to speculate that The Office's B.J. Novak might play Dr. Otto Octavius in the forthcoming Spider-Man sequel The Amazing Spider-Man 2 (see more on his mystery role here), The Daily Bugle--the movie's viral marketing site--made its first reference to the villain.

Octavius, better known as Doctor Octopus, is currently appearing monthly as the title character in Marvel's Superior Spider-Man, and his trademark cybernetic octopus arms appeared briefly in the film's trailer, which was released yesterday.

Octavius is rumored to be working for Oscorp in the story, which is a "behind-the-scenes" look at the company. Here's the pertinent bit:

So, if the future is already in the warehouse, how do they keep advancing? When money is no object, it means the best facilities filled with the brightest minds in science.

The scientific rumor mill (there is such a thing — I checked) has floated every leading name as a possible contributor. But none is more intriguing than world-renowned nuclear researcher Otto Octavius.

When asked about that rumor, Mr. Menken replied, “I can’t confirm or deny any rumors you read on the web. We talk to a number of different scientists every day about our special projects.”

The Amazing Spider-Man 2 is due in theaters in May.