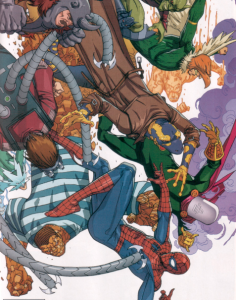 Veteran writer J.M. DeMatteis, the writer of the classic Spider-Man story Kraven's Last Hunt, came back to provide a touching back-up feature in last week's Amazing Spider-Man #700, the series's final issue and the last in-continuity appearance of Peter Parker as Spider-Man (at least for now).

DeMatteis joined ComicBook.com to talk about his story, "Spider-Dreams," and its connection to the mythology he's crafted with the character and elsewhere in his career over the years.

Does it feel a bit like a "greatest hits tour" when you end up doing stories for characters you've been associated with for years? You had a run on (Blue Beetle &) Booster Gold, followed by the JLI one-shot and now this.

No. In fact, one of the things I wanted to avoid with this Spider-Man story was a “greatest hits” feeling. I wanted to do a Spidey story that was very different from any I’d done before...and yet would pay tribute to the history of this character I love. Not just a tribute to Spider-Man’s general history, but to my own personalhistory writing Peter Parker’s adventures. I hope I succeeded.

Marvel, and Dan Slott, have been very secretive about the contents of ASM 700. Did you know ahead of time or was it not really germane to what you were doing?

I had no clue what the lead story was. I still haven’t read it: my comps just arrived this morning. I’m a big fan of Dan’s work and I can’t wait to see how it all plays out. As soon as I’m done answering these questions, I’m going to read the story!

Martin isn't named after Martin Goodman, is he?

The name Martin was in tribute to a writer named Stanley Martin Leiber...aka Stan Lee. The great-grandson, Stephen, was named after Steve Ditko.

Where did the "not every hero gets a happy ending" theme come from? It seems particularly relevant coming in this issue.

I don’t see it that way. Martin had some rough times, for sure—you live that long, it’s inevitable that you’ll experience some loss and pain—but in the end, the love of family sustains him. He’s had a good life, a valuable life, and has found a measure of happiness.

That said, what were your marching orders on this one? I would have thought it would be tempting to get one last heartwarming Peter story in there.

There were no specific marching orders beyond the page count. Steve Wacker asked if I’d like to contribute a story and that was pretty much it. Almost immediately I started getting images of a very old man who claimed that—once, long ago—he had been Spider-Man. The story just grew from there. (For the record: Steve W’s a first-rate editor and made a few suggestions that improved my story immeasurably.) 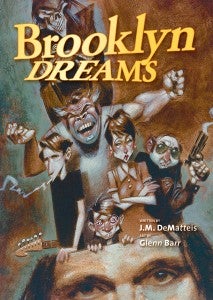 There's probably not a straight answer for this--but all these kind of mashed-together characters we see in Martin's story there because this isn't quite the same Marvel Universe we know, or are they all just running together in an old man's memory? Buddy correcting him on Kraven seems to support the latter.)

In many of my stories, most notably Moonshadow and Brooklyn Dreams (the title of the Spidey story, “Spider-Dreams,” was a nod to BD), I’ve played with time and memory, the way we think our lives have been versus the way they actually were; the way we choose to remember events, even if we know they might have been very different. That’s one of the things I wanted to explore in this story. Is Martin fabricating these memories for Stephen’s sake (or his own?), is he consciously distorting them, is this actually the way he remembers events? All of the above? This kind of approach opens up a variety of layers and levels and makes the writing interesting and challenging.

Ditto on the changing hair color of the bride in the wedding scene; is that just a matter of a color gaffe or was it scripted?

That was very intentional. Glad you noticed it.

And is “Spider-Dreams” a play on "Brooklyn Dreams" or is that just reading too much into things?