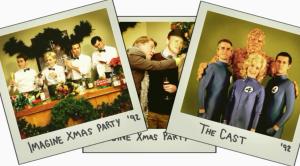 20th Century Fox, the current rights-holders to Marvel's Fantastic Four, are also the parent company of Fox, the original network on which Imagine Entertainment's new Netflix series Arrested Development aired for three years nearly a decade ago. And they have a little fun with some real(ish) history of superhero the franchise in the new season. In an episode revolving around Tobias, in which he mistakenly finds himself in a methadone clinic when looking for "method acting" lessons, he encounters a woman he's immediately taken with, who had appeared in a film version of Marvel's First Family that sounds suspiciously similar to the Roger Corman version from 1994. "Fourteen years earlier, DeBrie Bardeaux had played Sue Storm in the low-budget version of The Fantastic Four produced by Imagine Entertainment," says series narrator and real-life Imagine executive Ron Howard in the episode. "During Imagine's Christmas Party, a drunk lawyer reminded them that they would lose the rights if they didn't make the film in the next six days. After a two-hour search, they found their entire cast. They also proved useful six days later at the wrap party." That monologue was accompanied by the images above, with the photo of the caterers also being used for the film's wrap party, suggesting that the film's stars had gone right back to their regular catering gig after filming. How similar is that to the real-life circumstances surrounding the 1994 movie? Well, here's the nutshell version from Wikipedia:

In 1983, German producer Bernd Eichinger met with Marvel Comics' Stan Lee at Lee's Los Angeles home to explore obtaining an option for a movie based on the Fantastic Four. The option was not available until three years later, when Eichinger's Neue Constantin film company obtained it for a price the producer called "not enormous" and which has been estimated to be $250,000. Despite some interest from Warner Bros. and Columbia Pictures, budget concerns precluded any production, and with the option scheduled to expire on December 31, 1992, Neue Constantin asked Marvel for an extension. With none forthcoming, Eichinger planned to retain his option by producing a low-budget Fantastic Four film, reasoning, he said in 2005, "They didn't say I had to make a big movie." In September 1992, he teamed with B-movie specialist Roger Corman, who agreed to produce the film on a $1 million budget. 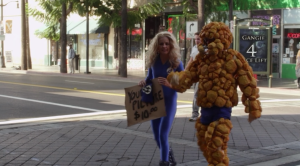 In the series, that's not the end of the Fantastic Four joke, either; hoping to cash in on DeBrie's fifteen minutes of fame, she and Tobias take to the streets of Hollywood dressed as members of the Fantastic Four in the hopes of convincing tourists to take photographs with them, only to be approached by lawyers for "Stan Lee and Marvel" who file a cease-and-desist letter against them. This became a running gag. You can see Tobias as The Thing and DeBrie as Sue Storm at right. Bonus points to the set dressing people for the "Gangie 4: Face Lift" poster in the background. Later, Desperate Housewives producer Marc Cherry is in his therapy group, leading to a situation where he, Tobias and Lucille II's brother Argyll decide to put on a musical of the Fantastic Four, which is unsurprisingly hampered by DeBrie's inability to act or sing.