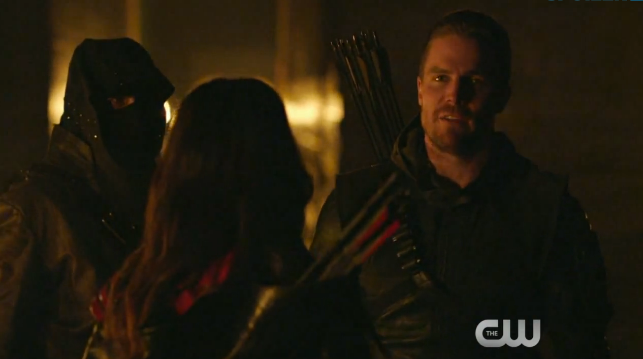 With only hours to go until Arrow’s midseason finale, The CW has released a new clip for tonight’s episode.

In the clip, (via ComicBookMovie) Ra’s al Ghul’s daughter, Nyssa al Ghul, returns to confront Oliver Queen. She gives Arrow a simple, but threatening message. If Arrow does not deliver Sara Lance’s murderer to Ra’s’ League of Assassins within 48 hours, then the League will murder countless Starling City citizens.

Tonight's episode, “The Climb,” sees Oliver confront Ra’s al Ghul for the first time. Nyssa’s message seems to be the catalyst for the confrontation, as Arrow is nowhere close to finding Sara’s killer, but won’t just let Ra’s slaughter innocent civilians. Sara, who was a member of Ra’s’ League while Oliver traveled to China, was murdered by an unidentified assailant during Arrow’s Season Three premiere.

Check out the video below for the full exchange between the two characters.

Arrow’s midseason finale airs tonight at 8:00 p.m. on The CW.