Last week, Arrow writer and Executive Producer Andrew Kreisberg joined reporters for a screening of "The Man Under the Hood" and "Seeing Red." Because of the wildly spoilery nature of tonight's third act, nearly nothing people asked was usable at the time, but now that it's out there, we can share some of the conversation. One such topic? The death of a major player in Oliver Queen's life. Read on to see what Kreisberg had to say about this week's shocking loss...

What went into the decision to kill Moira this week? Have you guys known all along that was the plan? It wasn't something we were talking about, certainly last year. I don't want to give the impression that somebody has to die, we spin the wheel and, oop! Bad luck Moira! The decision was -- just as with Colin Donnell -- it was difficult. Susanna has been with the show since the beginning and she was one of our big gets early on that signaled to the audience and to reviewers that this wasn't your average CW show, it wasn't your average superhero show. And like with Colin Donnell, these last episodes are her pinnacle. I think this is as good as anything that's on television and unfortunately because of the kind of show it is probably won't be recognized as such. But truthfully, you see all those scenes with her and Stephen and her importance to the show in helping Willa and Stephen going from solid actors to amazing actors is due to sharing screen time with her. The decision really was, just like with Tommy, where is her trajectory going? In Season One, she had this incredible secret that she was part of the Undertaking and she suffered for it and went to jail for it and then we've discovered that she had an even better secret which is that Thea is really the daughter of Malcolm Merlyn. And when that secret blew up, it sort of tore the whole family apart and obviously we've been taking steps to bring people back together again and we were talking about the future and knowing that we wanted Slade to really...it was only going to be powerful if Slade really changed the game by doing something truly monstrous. It was, well, if Moira wins the mayorship, if she makes up with her kids, what is she? What is Moira without some giant secret? And if there's another giant secret, for us it sort of felt like we were becoming a soap opera where it was "Well, yes, you tried to blow up the city, and you lied about this, and now you've lied about this other thing!" It sort of felt like in a way, she could die a hero's death and die this person who was conflicted because even as she's saying that 'we have to tell the truth,' we're seeing that she has kept this other horrible secret. You literally can't change her. She goes to the grave -- in spite of the fact that she sacrifices herself for her children, which is so amazing and there's a line in the next episode where Walter says to Thea, "you know, your mother showed you that she loved you in ways that few parents can," and yet she was still lying. And that was the essence of her character and that's why it was so great. We felt like ending it at this time left you with that feeling of what a great character she was, rather than becoming a caricature. That was the math and just like Tommy, it was horrible math and it was tearful math but her death, just like with Tommy, has a profound impact on everyone in the series. It certainly is what's going to drive Oliver in these next three episodes but also what's going to drive Thea not just in those three episodes but also into season three. Sometimes the worst thing you can do personally [as a writer] is the best thing you can do professionally. 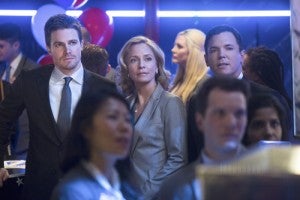 How did it come out that she knew Oliver's secret?

We had always talked about the idea that Moira knew that Oliver was the Arrow. And there's actually been a couple of other places where we were like, 'Oh, this is where we should let him know.' I thought one of the great things about 'Sacrifice,' last year's season finale, was that when Oliver walks in to talk to her, he's not Oliver Queen, he's the Arrow. He's saying we have to stop this and she'd be borderline low-IQ if she wasn't like, 'wait a minute!' But we always liked that she had never told him and everything felt like it came together in this one episode that again, secrets are a tough thing and it's one of the most interesting things about writing the show is when secrets are good and when secrets are bad. Even for Oliver, he hasn't told Laurel because he had it in his head that she shouldn't know but I think you guys will all see that he was wrong...because she could handle it. But yet, there was no reason for Thea ever to know that Malcolm was her dad. We love that we have a superhero show where the heroes are doing the wrong thing a lot of the time and making bad decisions even with the best of intentions. I think that's ultimately the thing aboit Moira: We always said that she's doing the wrong thing for the right reasons and everything that she's doing, she's doing because she loves and wants to protect her children, even if that means blowing up the city, lying to them, hurting their feelings and I think one of the most interesting things for us is the realization that our villain, Moira, and our hero, Oliver, were essentially doing the same thing and havin Thea call him out on it. If you look at Star Wars and The Empire Strikes Back, Star Wars introduces the characters and they're very much archetypes and in Empire Strikes Back you really got to go deeper and darker and that's sort of the fun thing of a sequel is that once the characters are established, you get to put them through their paces and take them to different places and we always looked at season two as the sequel to season one -- we do feel like things have gotten richer and deeper and these decisions that we've made are what's allowed that to happen. What was the secret that was on the tip of her tongue right before she died? Is that something we'll see play out right away or is that something that we'll see into Season Three? I think what she was about to tell them is going to play out sooner than you think. What does it mean for the Mayor's race now that one candidate is dead and the other one is evil? Well, they were both evil! [Laughs] I think the politics of Starling City are probably less important than the fact that there's going to be supervillains running around the city. I think the one thing you don't get from this episode is maybe Slade didn't just kill Moira to piss Oliver off, and maybe somebody realized that.