The source behind the Wonder Woman rumor that's driving the Internet crazy today has spoken, and he's said "Bulls--t," and called out the entertainment press for lack of due dilligence.

As we reported over the weekend, Batman-On-Film‘s Bill “Jett” Ramey, who has a solid track record managing Batman movie rumors and debunking falsehoods, took a few swings at some of the burning questions that fans have about the upcoming Man of Steel sequel, tentatively titled Batman vs. Superman.

And as he did, he speculated about what he thought they might do to make Wonder Woman work in the context of the new DC Cinematic Universe (namely, that the Amazons could be descended from ancient Kryptonian settlers on Earth). Because some of the other things he mentioned in the same column were ostensibly from inside sources or industry grapevine, a number of fans, pundits and even reporters didn't differentiate between the different types of discussion and reported it as something that was likely to happen. 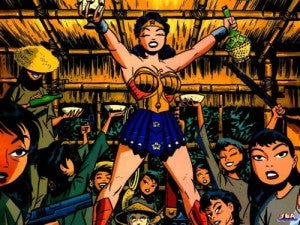 And, predictably, all hell broke loose when people all over the Internet decided that the character was being mishandled and disrespected.

Well, Ramey took to his websites Facebook page to share a new update, essentially pleading for people to calm down and realize that he was just speculating.

"OK, it's not funny any longer," he wrote in part. "In the recent mailbag I did with you all, I speculated on how Goyer/Snyder *might* account for the origins of the Amazons: Decedents of ancient Kryptonian astronauts who were able to create an all-female race due to Kryptonians artificially creating their offspring. It was nothing but a guess -- pure speculation and my opinion -- and nothing more. Now, many outlets have picked up the 'story' and have run it as either me claiming it to be fact or me claiming it's 'inside info/rumor.'"

He went on to call that practice "bulls--t" and to further say that none of his "mailbag" posts should be treated as straight news.

Batman vs. Superman: Wonder Woman "Rumor" Debunked By the Source