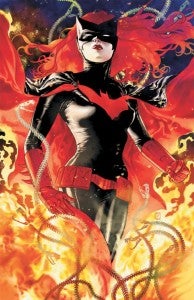 Shortly after Haden Blackman and J.H. Williams III announced that they would leave Batwoman over creative disagreements with DC Comics, a number of fans started to claim they would leave the title, predict its doom or suggest that DC should not continue it without the creative team that has made it one of the company's most acclaimed series in the New 52.

Williams, in particular, has been involved as a writer, co-writer or artist in almost every major Batwoman story since the end of 52, the year-long maxi-series event in which she was introduced. The character's co-creator Greg Rucka worked with Williams on the Batwoman: Elegy storyline before leaving DC prior to the launch of the New 52 and giving way to Williams as the character's primary caretaker.

The Batwoman title itself also isn't a sales powerhouse; in spite of being a "Batman family" book, the most recent sales numbers indicate that it barely cracked the Top 100 in July, scoring a spot at #90 on the overall sales list. That's just four spots above Rucka's creator-owned Lazarus, which has significantly less awareness among casual fans and retailers. All of this contributed to a sense that maybe it wasn't entirely crazy to wonder whether the departure of Blackman and Williams would mean the end of the road for Batwoman as an ongoing, monthly comic book series.

Not so, according to a handful of tweets made by DC Co-Publisher Dan DiDio who, responding to fans, suggested that new blood and a change of direction could be in store for the only Big Two title to feature a homosexual title character.

"JH is leaving but we are continuing to support this character as we always have," DiDio told one Twitter follower, adding to another, "actually we hope the team change can bring renewed energy to the series."

While it was arguably never very likely that DC would cancel a book in the wake of such a high-profile walk-off, this is the first time anyone has publicly acknowledged a creative team change. Since the December issue has not yet been solicited--and that's the finale for the current team--they could have as much as a month before announcing who will take over.