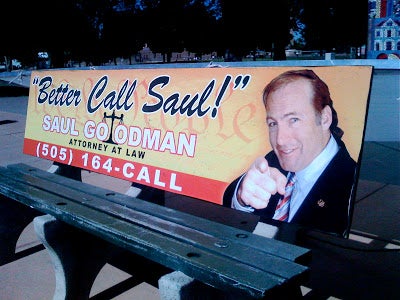 In spite of the fact that there was nothing in-story to indicate that Walter White or Jesse Pinkman had ever crossed paths with Saul Goodman before they hired him on as their lawyer in the Breaking Bad episode "Better Call Saul," showrunner Vince Gilligan implied during a recent interview that the pair--and any number of other Breaking Bad characters--could make cameo or guest appearances in the forthcoming black comedy featuring Bob Odenkirk's shady lawyer character. Of course, Better Call Saul--the spinoff series, not the Breaking Bad episode--is a prequel, so anyone who died in the show is fair game to show up in the prequel. The real question is how they might incorporate Heisenberg and company into the series without contradicting their earliest appearances in Breaking Bad. Until now, Gilligan had been pretty hesitant to share much in the way of details on the prequel, but in his latest interview with The Hollywood Reporter, Gilligan admits that "Personally, I'd have a hard time resisting putting all these guys in for a cameo or two every now and then." 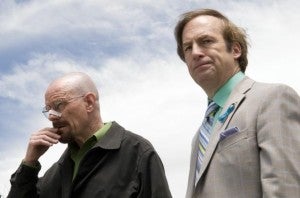 He also shared some details on the way the series will be shot: visually, it will be very similar to Breaking Bad, and it will continue to be filmed in New Mexico, home to the original series and to generous tax subsidies for TV and film production. However, he said, while Breaking Bad was typically about 75% serious and 25% comic in tone, that balance will be flipped for Saul--which kind of makes sense when you consider that he was always a comic relief character. Of course, as we joked back when the spinoff was first rumored, Gilligan is no stranger to the potential downside of all of this. Here's a pertinent bit from the profile:

"There's obviously a danger inherent in doing a spinoff, but I just love the character of Saul Goodman [Bob Odenkirk] so much, and part of me doesn't want to say no to this world," he says of the prequel, acknowledging that he's familiar with the potential pitfalls of a follow-up, having worked on the X-Files spinoff, The Lone Gunmen, which was met with critical derision and a quick ax after 13 episodes back in 2001.