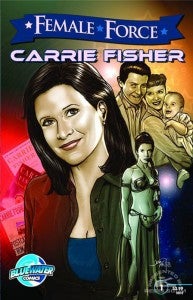 Actress and living science-fiction icon Carrie Fisher is about to join a force of a whole other kind.  Bluewater Productions has announced that a comic book focusing on the actress will be the next installment of their celebrated and popular Female Force line of comic books.  The actress has had a colorful past; her parents were both famous Hollywood actors, she was the star of the original Star Wars trilogy, and an author in her own right. There will be an extra piece to the comic however, with a portion of the proceeds from the sale of each comic going to Silver Hill Hospital in New Canaan, Connecticut.  The facility is well-known for its treatment of those with mental illness, and Fisher herself is no stranger to the subject, she herself waging a well-known battle with bipolar disorder.  Bluewater will also run special information on bipolar disorder for its readers, all in order to help clear up misconceptions about the illness.

"I am a huge fan of Carrie’s and I, too, suffer from bipolar disorder. She has inspired me in so many ways. Her candid wit and brutal honesty is what is needed to help lift the stigma off of the disease," said Jason Schultz, Vice President of Bluewater Productions.  The issue will be written by CW Cooke and illustrated by Ryan Paule with cover art done by Joe Phillips.  The issue is sure to be a popular one, and other issues in the Female Force line have sold out quickly, so be sure to reserve your copy with your local comic retailer today!