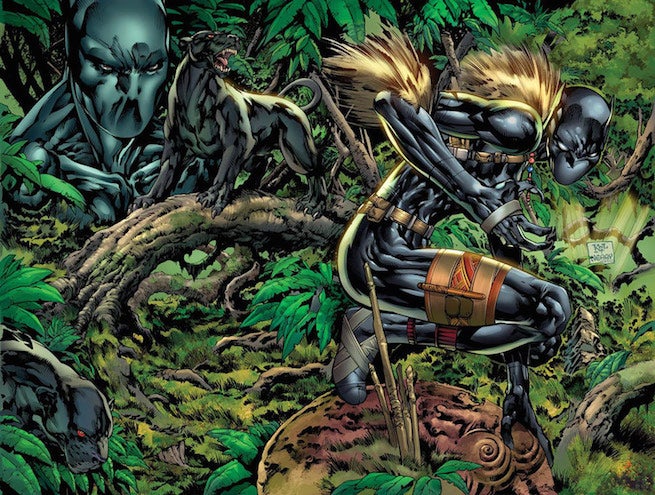 The Black Panther isn’t the only reason I’m eagerly awaiting the the live action film when it hits theaters in November, 2017.

Although T’Challa in action is more than reason enough.

The opportunity to see the mythical land of Wakanda, and the fiercely “Adored Ones,” the Dora Milaje, on the big screen is well worth the price of admission alone.

But as the Captain America, Iron Man and Thor films have illustrated, the supporting players, (Falcon, Bucky Barnes, War Machine, and Lady Sif) will also get an opportunity to take center stage.

This is why I’m hoping T’Challa’s younger sister and fellow Black Panther, Shuri has a featured role in the film.

Much like her brother, Shuri is a prodigy who has been raised from birth to be the pinnacle of excellence. Whether it’s literature, politics, or combat, there are very few things Shuri doesn’t easily excel at.

However in terms of personality, the two royal siblings couldn’t be more opposite. Where T’Challa is reserved and methodical, Shuri is often brash and hot-tempered. Coveting the Black Panther mantle since she was a child, a part of Shuri has resented T’Challa who she believed was the favored child.

However when T’Challa is seriously wounded in an assassination attempt, Shuri assumes the role of the Black Panther and Wakanda’s ruler.

In the comics Shuri eventually evolved from T’Challa’s brash and hot-headed baby sister to a powerful and mature warrior queen.

Shuri would definitely be a great addition to the Marvel Cinematic Universe and there are a plethora of storytelling opportunities with her in play.

Besides, given that Thanos is inevitably planning to invade Earth, the Avengers can use all of the help they can get and having two Black Panthers on deck certainly wouldn’t hurt matters.