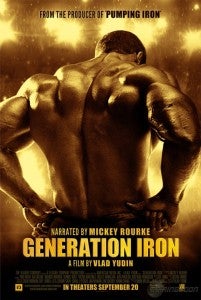 Arguably the least likely of Arnold Schwarzenegger's movie to get a remake is Pumping Iron, the bodybuilding documentary that helped to put him on the map.

That's just what's happened, though, courtesy of Head Smash creator Vlad Yudin, who directed the upcoming release Generation Iron. The film is due out on September 20, although you can see the trailer below.

According to the studio, "Generation Iron transcends the original 1977 docu-film by bringing a new perspective to the intricate world of professional bodybuilding; illustrating the lives of bodybuilders beyond the gym."

Narrated by Academy Award Nominated actor Mickey Rourke, the film portrays the nation’s top seven bodybuilders, taking a look at "the personal dedication and willpower needed to become a winner." The film depicts the pain and rigor of training, the glory of victory, the despair of losing along with the camaraderie and the rivalry as these athletes prepare to compete for the world’s most prestigious and coveted title at the renowned New Orleans Arena in Las Vegas.

"Sci-fi and supernatural thrillers have always been something I wanted to do, and going forward that’s what I’m going to be focusing on in many different ways," Yudin told ComicBook.com earlier this year, talking about the connections between Generation Iron and Head Smash. "But it’s really about the story. I’m also doing a film right now that’s called Generation Iron, and it’s a modern-day Pumping Iron film, about body building. Completely different–to me, it’s all about the emotional connection that you have to the actual stories and the characters."