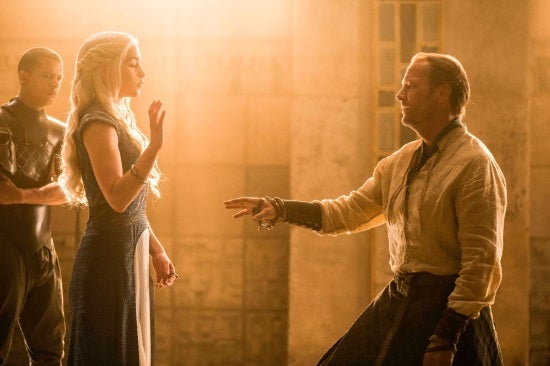 In last night’s episode of Game of Thrones, “The Mountain and the Viper,” Daenerys Targaryen finally became aware of a secret that her most trusted adviser, Jorah Mormont, had hoped would remain buried and forgotten.

In the first season of Game of Thrones, viwers became aware that Jorah was sending information about Dany back to Varys in King’s Landing. Jorah even received a royal pardon from King Robert, but he never returned home. Instead, he prevented the attempt on Dany’s life and stayed with her as a loyal follower. However, Barristan Selmy came into possession of Jorah’s pardon and showed it to Daenerys.

In a new video released by HBO, the actors who play Dany and Jorah – Emilia Clarke and Iain Glenn - discuss this betrayal.

Other History of the DC Universe: John Ridley Teases DC Characters He Still Wants to Explore