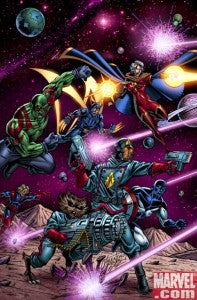 , the same movie news site that recently pegged Black Panther as the next Marvel solo superhero film, are now declaring that the studio's next team film will not be Avengers 2, as widely assumed, but instead will be Guardians of the Galaxy. The site claims that Marvel Studios will make the announcement at Comic-Con and that the script is "incredible."

Latino Review has a good (not great) record of being right on such things, but the rest of the entertainment press is falling into line with this prediction, perhaps because it makes sense given the studio's openness about wanting this movie to be

The cosmic team are, of course, bound pretty tightly with Thanos in the comics mythology and so it's probably not surprising that the Mad Titan, who appeared at the end of The Avengers, will play a role in the movie, although what's more notable is that the story says that Guardians of the Galaxy will serve as a lead-in to Avengers 2, meaning in essence that Thanos will likely serve a similar role in Guardians of the Galaxy and Avengers 2 as Loki did in Thor and then The Avengers; a villain in both, his second plan will get bigger, madder and more in need of some Hulk-smashing.

Will round 2 be The Infinity Gauntlet? Well, that's been the theory ever since Thanos was first seen onscreen and it still makes sense, although the idea that he would appear onscreen as a major player and the gauntlet wouldn't be a big part of it seems odd, so maybe Guardians of the Galaxy will lead into that as he assembles the weapon.

Guardians of the Galaxy to Be Announced at Comic-Con