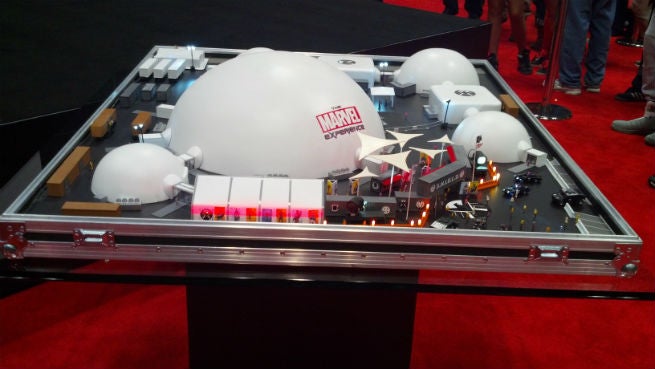 It's only been about an hour since Marvel announced a massive new push for Secret Wars, and fans online are already curious just how much of a footprint the mega-event will leave on their publishing line and beyond.

Since the announcement was made at the Avengers S.T.A.T.I.O.N. in New York's Times Square, it seems more likely than not that the interactive, immersive environment will be impacted in some way -- a curious turn of events, since the S.T.A.T.I.O.N. is currently based on Marvel's films, not their comics.

But none of that takes into account today's other big announcement -- The Marvel Experience, a fully-immersive traveling Marvel theme park, complete with a 360-degree, 3D stereoscopic theater, a 4-D motion ride and more.

The Experience is an inventive, almost post-cinematic adventure story told in multimedia 3- and 4-D that allows fans to "gamify" their experience.

Perhaps more importantly, it's been said that the Marvel Experience will allow the Avengers to interact with "unexpected" Marvel heroes they might not be able to do otherwise.

At least Spider-Man is listed and depicted on the poster, and while the X-Men and Fantastic Four are not, Wolverine was specifically mentioned during the Marvel Experience presentation. In the Secret Wars poster, Peter Parker doesn't appear, but Miles Morales does, seemingly making it clear that the absence of Peter isn't about him being a Spider-Man character. So as Secret Wars presumably grows to encompass the whole of the Marvel Universe, one assumes that the expected expansion of the Marvel Experience will match it.

That said, could the prevalence of Spider-Man on the poster images tie into the oft-repeated rumors that surfaced this week that Marvel and Sony are quitely putting some kind of deal together that would allow the wall-crawler to appear in an Avengers movie?

When asked during the presentation whether the Experience would be updated to reflect changes from the comic books and movies, creators said that it would, eventually, but that for the time being they were "laser-focused" on making the first such interactive adventure the best it can be.

How Will Marvel's Secret Wars Impact the Marvel Experience?