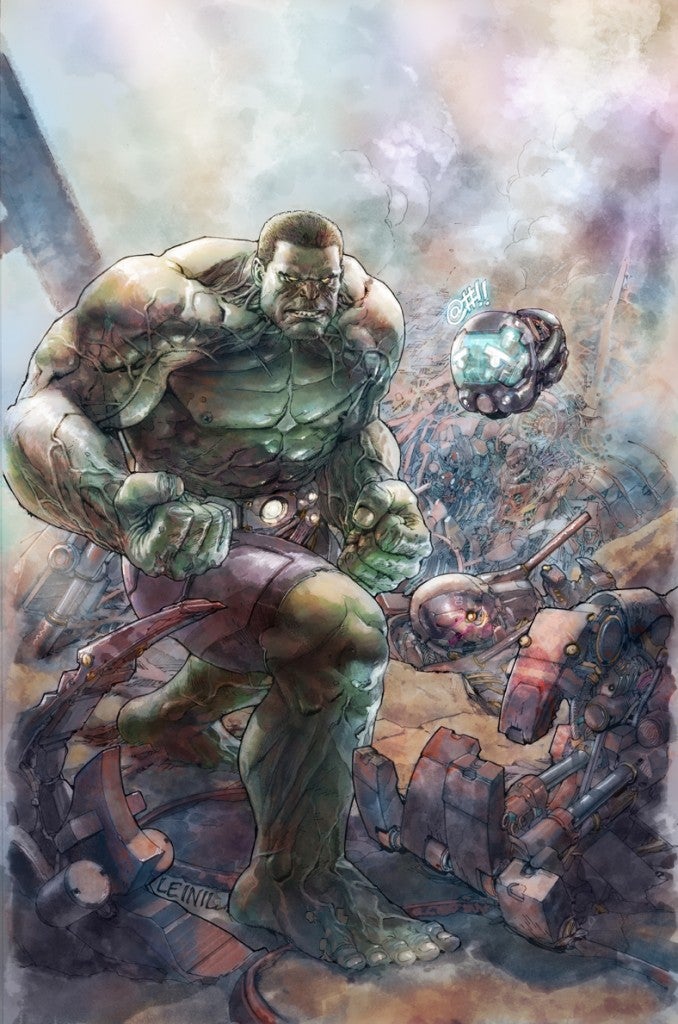 As soon as Leinil F. Yu's first art started to be revealed for the Marvel NOW! launch of The Indestructible Hulk, fans started to joke, complain or at a minumum make comparisons to Superman's New 52 costume: why would someone who's "indestructible" wear armor?

The next of Marvel's Next Big Thing chats, which took place starting at 3 p.m. EST today, brought together writer Mark Waid and artist Yu to talk about the series. One of the things Mark Waid had to say?

"As for the armor-type stuff we've seen in some Hulk shots, it's not for Hulk. It's for Banner."

That'll be the money quote, considering how many people have taken issue with the armor, but what else did we learn today? Here are some highlights from the liveblog:

"Bruce Banner has decided to take a bit of a sabbatical from worrying about trying to control the Hulk," Waid said. Also, "If you ever want to get into character for writing the Hulk, go to the DMV for half an hour. That'll do it."

The reasons why he is--and exactly the deal he cut to become--an Agent of S.H.I.E.L.D. is a mystery that will build out as the story goes.

The Hulk destroys and Banner builds. Banner will be spending his time and energy making up for what the Hulk does.

The reasons why he is an Agent of S.H.I.E.L.D. is a mystery that will build out as the story goes on.

Banner realized that the Hulk is not something he can stop. It's something he can control to a degree, but 'Hulk happens,' as he puts it. So when he comes out, S.H.I.E.L.D. points him where they want him to go. Think of him as a cannon, not a bomb.

S.H.I.E.L.D. has what they believe is a fairly tight leash on the Hulk, but they're mistaken. That's part of the fun of writing Maria Hill and Bruce Banner, they both have different perspectives on the situation.

From the beginning they wanted to give Hulk some villains to punch that he hasn't punched before. We've got Attuma, Frost Giants, the all-new, all-different Quintronic Man, an old Hulk villain from the '70s.

There is a Big Bad behind the first year, but Waid doesn't want to give away who it is.

What other supporting cast will we be seeing? He needs support staff, interns, lab assistants. Now, imagine how difficult it is to hire people for a position where you have to work with Bruce Banner in a closed space all day long.

The lab assistants each have a specialty. They're introduced in issue 3 and developed more in issue 4. And each of them has a secret--a hidden self inside of them that may or may not need to be explored.

Will there be a Hulk/Daredevil meet up? They haven't scheduled it yet, but yep. No question.

The floating robot head on the cover of #1 ties into the leash S.H.I.E.L.D. thinks they have on Hulk.

In preview art, we see Maria Hill and Coulson. Maria is a great foil for Banner because she's a control freak. She's not a terribly relaxed human being. It is not above Banner to purposefully drop a box on his foot in front of Maria just to see her heart stop for a beat.

Another highlight was when a fan asked Waid to "save" The Hulk the way he has Daredevil. Waid said, "On the surface of it, its hard. It's a less human, street-level book, so all the things that worked in Daredevil were harder to duplicate in Hulk. The commonality in the two books is that Bruce Banner, much like Matt Murdock, reaches a point in his life where he realizes the things he's been doing have not been working.

"That's how you honor what's gone before without disavowing it. The characters look back at their history and say, I want to try something different because what I have is not working.

"What Stan Lee and Jack Kirby did back in the day was they created the world's first persecuted super hero in the Hulk. Bruce Banner was the seminal morose, tortured super hero. 50 years later, you can go to a comic shop, pick up a random stack of super hero comics, and most of them will probably feature tortured super heroes."

The series, which constitutes the first time Waid and Yu have worked together since their best-selling run on Superman: Birthright, begins on November 14.  While it's theoretically part of the Marvel NOW! tapestry, it sounds as though there are no immediate plans to tie it in with other books just yet.

Hulk's Armor "Is Not For Hulk - It's For Banner"

Jason Momoa Wants to Make a Movie With The Rock

The Witcher 4 Won't Be Revealed at WitcherCon Event

My Hero Academia Cliffhanger Leaves Lady Nagant in the Balance