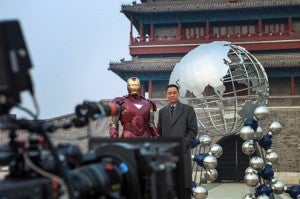 In the first photo taken on the live set of Iron Man 3 in Beijing, released yesterday to Deadline, the filmmakers may have offered a hint as to the nature and timetable of Chinese involvement in the film.

The shot is a publicity photo of actor Wang Xueqi, who plays Dr. Wu, with a suited-up Iron Man in front of Beijing’s Yongdingmen gate.

Take a look at that photo--if it isn't the Mark VI armor seen in Iron Man 2 and Marvel's The Avengers, it's pretty close. Certainly much closer than anything we've seen from Iron Man 3, where he appears to spend most of the film wearing new suits of armor.

This may play into the idea that the film is part of a trilogy and that, while we've heard the events of Marvel's The Avengers will weigh heavily on Tony, director Shane Black is essentially picking up where Iron Man 2 left off. It could be an explanation as simple as the Mark VII armor being experimental at the end of The Avengers and Iron Man opting to do international travel in a more stable build. The most likely cause, though, seems to be that this scene is a flashback and took place back when this was still the primary Iron Man armor.

Regardless, the idea of Tony doing a public appearance of some kind in the armor suggests it's probably a scene from the early going of the film if it isn't a flashback--and that suggests that speculation Dr. Wu may be one of the scientists, along with Guy Pearce's Aldrich Killian, could be part of the Extremis Project could be grounded.