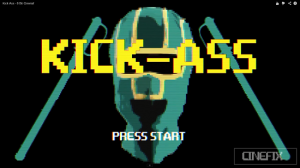 CineFix has brought their 8-Bit Cinema YouTube series to Kick-Ass, just in time for Kick-Ass 2's press campaign to really heat up ahead of this month's theatrical release.

Here's how they describe what they're doing in the amazingly cool short video below, which adapts Kick-Ass into the look and feel of an 8-Bit video game:

8 Bit a.k.a. the third generation of gaming started in 1983 with the Japanese release of the Nintendo Family Computer and Sega. Can you guess what games inspired our 8-bit version of Kick Ass? Comment below and suggest the next movie 8-bit Cinema should "gamify".

Summary: Dave Lizewski is an unnoticed high school student and comic book fan who one day decides to become a super-hero, even though he has no powers, training or meaningful reason to do so.

Kick-Ass is Even Cooler in 8-Bit