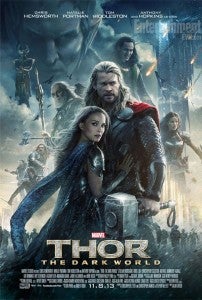 Disney has just announced another Marvel character will be featured at their Disneyland theme park. When Iron Man 3 was released this summer, Disneyland featured an exhibit called Iron Man Tech Presented by Stark Industries, which gave fans a close-up look at Tony Stark’s Hall of Armor and an opportunity to virtually “suit up” in the Mark 42 armor.

With Thor: The Dark World scheduled to arrive in theaters on November 8, Disneyland is doing a similar exhibit involving the Thor sequel. According to the Disney Parks blog, Disneyland guests will be able to visit Asgard this fall and come face-to-face with the Mighty Avenger, Thor.

However, don't look for Thor's brother Loki to be there. In response to a fan question about Loki, Disney communications manager Shawn Slater said, "Meeting Loki would be pretty awesome (it was certainly cool to see Tom Hiddleston make an appearance at the D23 Expo)! I’m afraid there are no plans at this time, though, to bring Loki to the park."

Marvel's Thor To Appear At Disneyland