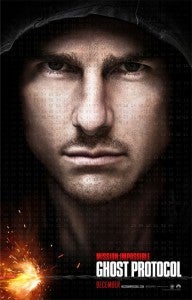 In what's either one of the most inexplicable pieces of scheduling in recent history or a placeholder spot that the film will eventually move off of, Paramount's Mission: Impossible 5 will open on Christmas Day 2015, just one week after Star Wars Episode VII hits theaters.

Of course, J.J. Abrams, who will write, direct and executive produce Star Wars, is a producer on the Mission: Impossible franchise. He has been credited with the success of Mission: Impossible: Ghost Protocol, the series' most recent installment that injected life back into the flagging series. So while it's entirely possible that Mission: Impossible 5 was always on track for this release date (Star Wars just announced their date last week after going back and forth a few times), it seems as though he would have known before now that they would be going head-to-head with what's widely expected to be one of 2015's biggest box office juggernauts.

Jack Reacher director and The Usual Suspects screenwriter Christopher McQuarrie is directing the film from a script by Iron Man 3's Drew Pearce.