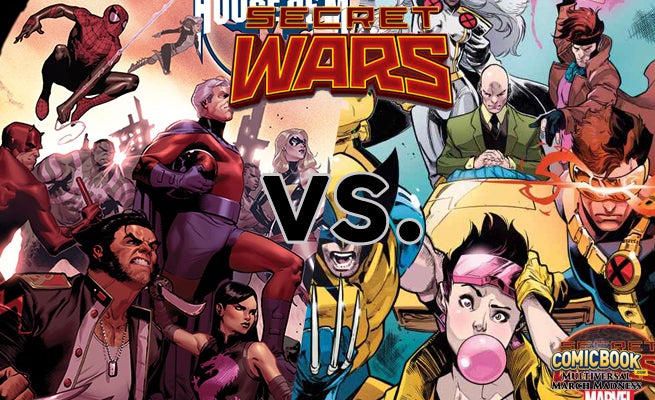 Multiversal March Madness' opening rounds continue! Though DC and Marvel Comics are breaking the piggy bank on their endless realities with events Convergence and Secret Wars later this spring, the bracket fever from the NCAA March Madness has our minds stuck on the tournament style crossover event.

The Monarchy of M (House of M) Vs. Westchester (X-Men: The Animated Series/Nineties Era)

Stats: The Monarchy of M is what the Marvel Universe would look like if everybody in it,mostly Magneto, got their heart's desire…at least as Scarlet Witch understands it. Mutants now dominate the planet, with Magneto's family – the House of M – elevated to royalty. Wolverine runs S.H.I.E.L.D., Spider-Man is popular and married to Gwen Stacey, and Cyclops and Emma Frost lived happily ever after. Unfortunately, humans are on their way to extinction.

Advantage: Mutants at the height of their power.

Disadvantage: Not exactly the egalitarian society Professor X dreamed of.

Stats: The dream of the '90s is alive in Westchester. Many modern X-Men fans were introduced to Marvel's merry mutants through the animated series that aired on Fox, from 1992-1997. Using the popular character designs of Jim Lee, and a lineup resembling the fan favorite Blue Team, the cartoon gave modern takes on classic X-Men storylines like "The Dark Phoenix Saga," "Days of Future Past," and "The X-Tinction Agenda."

Advantage: Mutants at the height of their popularity.

Disadvantage: The '90s did not exactly age well.

Will pouches prevail, or will Magneto's dream proceed to the next round? Decide in the poll below!