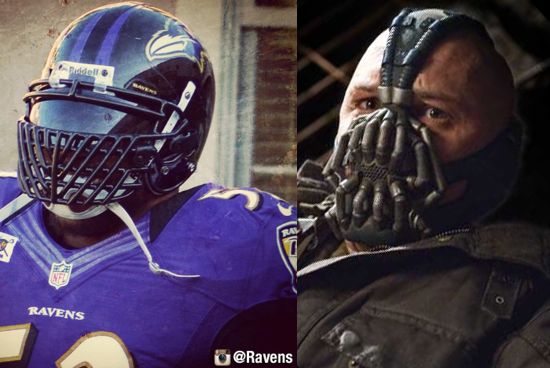 Super Bowl XLVII seemed to remind quite a few people of The Dark Knight Rises. When the lights went out, many were expecting Bane to step out and deliver some kind of speech. 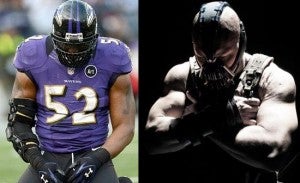 Of course, many also thought Baltimore Ravens linebacker Ray Lewis was engaging in some Bane cosplay. Ever since Ray Lewis adopted a new facemask, the twitter references to Bane have been pretty much non-stop.  Not only does Ray Lewis' facemask remind people of Bane, but Ray Lewis even has a brace on his right arm just like Bane.

If the outfit similarities weren’t enough, Ray Lewis also seems to have a propensity for 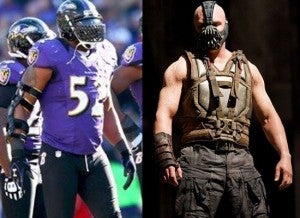 striking Bane like poses. Then again, maybe it’s Bane who’s copying Ray Lewis on the poses, since Lewis has been doing them for awhile.

We’ve included a couple of photo side-by-sides showing the similarities. There’s also a couple video mashups of some Ray Lewis game action along with sound from The Dark Knight Rises. However, in the videos Ray Lewis seems to be playing the Dark Knight role rather than the Bane role.

Oh yeah, we should probably add that the Baltimore Ravens just won the Super Bowl 34 to 31 over the San Francisco 49ers. It was a good day for Bane, who can now retire as a champion.