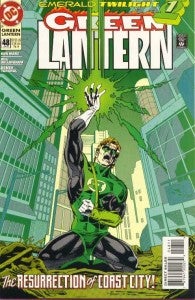 It's been nearly twenty years since the launch of Emerald Twilight, the Green Lantern story that would drive Hal Jordan mad, disband the Green Lantern Corps and catapult writer Ron Marz to fame as one of the most controversial superhero writers of the decade.

Between threats to his person made by fans at conventions, Marz had to contend with the earliest days of the Internet and one of the first major cases of fan backlash; an organization called H.E.A.T. (Hal's Emerald Attack Team, later revised to "Advancement" rather than Attack after they drew criticism) was formed that not only threatened Marz, his editors and DC in general but also bought up ads in industry trades demanding changes be made to the story and Hal be reinstated as the "one, true Green Lantern."

Ultimately they got their way--but it was a decade later and only because someone who shared their love of Hal Jordan (if not of Internet tirades and violence) got the Green Lantern gig. 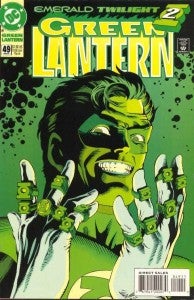 That supporter, of course, would be DC Chief Creative Officer Geoff Johns, who has been criticized in the past for implementing ideas he came up with as fan fiction into DC's canon. But that's another discussion for another time, and his run on Green Lantern is widely accepted as one of, if not the, best the series has ever seen.

When we recently ruminated a bit on what the story had meant for Hal, and the way it shaped two decades of stories, it got us thinking: What did Ron Marz think about it after all this time?

Marz joined ComicBook.com this week to talk about the impact Emerald Twilight had on the character and on his own life--and the lasting impact he left on the Green Lantern titles in the form of Kyle Rayner, the character Marz and artist Darryl Banks created to replace Hal after the events of Emerald Twilight.

ComicBook.com: Now, I talked about this the other day, and I think that Hal Jordan is far better off for your having written Emerald Twilight than he would have been otherwise. It seems to me that fans who never cared for him gave him a chance, and the fans who did like Hal became so galvanized by the story that they became one of those passionate fandoms that drives revenue.

Ron Marz: I think a lot of it is --and this is true of anything--people don't appreciate what they have until you take it away from them. 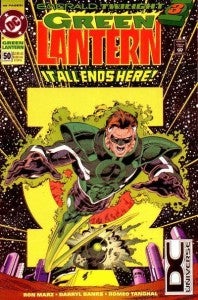 ComicBook.com: Has it been a little bit weird, in recent years, to watch the Silver Age version of the mythology kind of step up and overtake everything you did in the '90s? It seems to me that at first they tried to at least pretend that they were working to keep your run intact but later on it just kind of became anything goes.

Marz: I don't take any of it personally. To me they're all just stories. I don't find any one thing more valid than another.

To me they're all just imaginary stories and that is the nature of ongoing superhero comics, is that the stories that are done are built on the stories that came before in some way or another and everybody that comes into a situation like that--hopefully you'll leave something behind for someone else to play with. Once you do walk away from a series or a character, that's somebody else's toy to play with now and you can't get bent out of shape no matter what happens.

That's why they call it work for hire. You're hired to the work until you're not doing the work anymore so there's no sense in becoming overly invested in it because ultimately it's not yours. If you want to work on a character or a series that you exclusively decide what happens, that's what creator-owned work is for. Nobody is ever going to take Shinku and do somethign that [Lee Moder and I] don't want done with her. That's the bargain that you make going in.

It always seems weird to me when creators do a work-for-hire gig and then get upset because somebody comes in and does another work-for-hire gig. I don't mean to sound dispassionate about it  because why you work on this, is that you're completely invested. I still have a huge amount of affection for Kyle and for the run I was able to put together with guys like Darryl Banks and Paul Pelletier but at the same time you have to be realistic about it and know that's DC's property. They will ultimately decide what happens. To me it's just wasted energy to get upset about any of it.

ComicBook.com: Obviously we've seen it happen to a bunch of people over time, but was it weird for you getting the biggest gig of your life and then having people accosting you about it at conventions almost instantly? 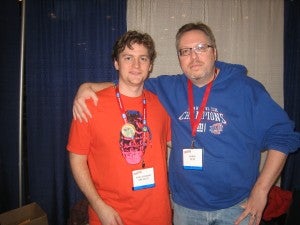 [Editor's Note: One such fan was me. I approached Ron in 1995 or so at a convention to yell at him for having killed off fan-favorite supporting character Kilowog in a way that I didn't think could have worked due to the technical constraints of the scene. The combination of "you killed my character!" with "That shouldn't have worked and it's shoddy research!" gave me a sense of righteous indignation, but Ron was such a so patient and kind with his time that it was very difficult to remain mad at him on a personal level. The image at left is the pair of us, about ten years after that, at New York Comic Con in 2008.]

Marz: [Laughs] Yeah, because getting upset at a real human being because of what happens to imaginary human beings makes all the sense in the world.

The unfortunate part of it is that comics are always the shotgun marriage of art and commerce. The creators are more likely to come down on the side of art and the publishers to come down on the side of commerce. Ultimately when the publishers are the ones making the decisions and deciding what gets published and what direction the storylines go in, they'll probably be more commercial than something the creators would do left to their own devices.

Same thing with Emerald Twilight, obviously. They offered me the gig after they decided that they weren'getting what they wanted from Gerry and I truly looked at it in terms of, is this a gig that I want? I can only look at it from my point-of-view, which was really about: did I find the offer enticing and did I think we could do a good job on the story.

But in a larger sense, sure, if I had turned it down, somebody else would have picked it up and created...the same thing would have happened to Hal because that was the editorial mandate. "This is where the storyline is going." What happened in [Green Lantern #] 48, 49 and 50--the broad strokes of it were determined by an editorial edict and an outline that was given to me. It wasn't a long outline and there wasn't a lot of detail but there was certainly a sense of here, this is where we're going to go with this. 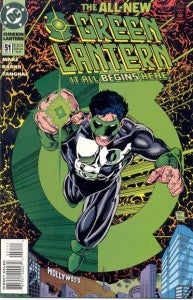 ComicBook.com: Did you realize at the time that this wasn't just a high-profile gig, but that this would be something that was a game-changer for your career and make a permanent mark on you, Darryl, Green Lantern...all of it?

Marz: I didn't have any idea that "Here's a big deal." I'd been in the industry what, like 4 years at that point? I probably wasn't smart enough to understand that this will be the thing that--hopefully won't define my career but it's a big mile post along the way.

I wasn't thinking about that sense of it. i was thankful for the opportunity and that we were getting to make up stuff as we went in terms of bringing this new character into the DC Universe. It was a perfect way for me to get acquainted with the DC Universe as a writer.

Ron Marz will return to another title that he's played a key role in shaping--Witchblade--later this month. Stay tuned for more coverage of that going forward.

Ron Marz Looks Back on Nearly 20 Years Since Emerald Twilight