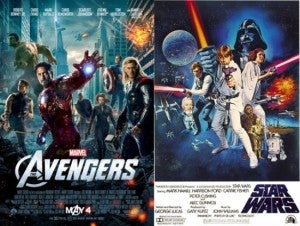 If statements made at the Television Critics Association press tour are any indication, ABC is looking to make the most of Disney's past and recent acquisitions. While Marvel's Agents Of S.H.I.E.L.D. has yet to premiere, ABC Entertainment's president Paul Lee seems to already be thinking about more Marvel shows.

According to The Hollywood Reporter, Paul Lee said "We are loving this relationship [with Marvel]. The relationship with Marvel and with other Disney [intellectual property] across the company is something we are ambitious to build. We have lots of little schemes in mind."

While  a live action Star Wars TV show was once considered too expensive to put on air, things seem to be changing now that Disney owns the Star Wars franchise. Paul Lee said, "We have started conversations with them. I'd love to go there. I'm a particular fan of Lucasfilm. It's an amazing world."

Star Wars And More Marvel TV Shows In The Works