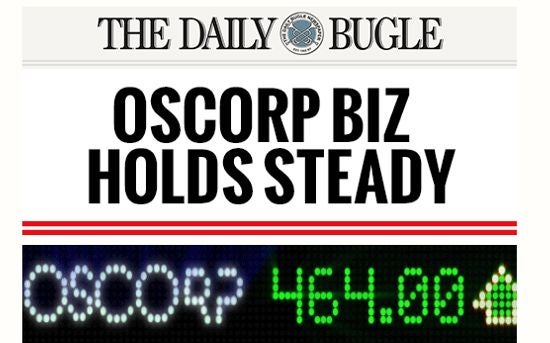 An official viral site for The Amazing Spider-Man 2 has been updated with some potential villain spoilers. On The Daily Bugle Tumblr page, The Daily Bugle story below about Oscorp was posted earlier today. There are several interesting observations that can be made from the article, such as Norman Osborn being sick.

However, the biggest reveal might be the inclusion of the name Spencer Smythe. In the comic books, Smythe is a villain, who created the robotic Spider-Slayers. Could he be another villain that will appear in Amazing Spider-Man 2? Or is he just being introduced to possibly play a role in Amazing Spider-Man 3?

"Despite the assault on Oscorp Tower two weeks ago and the revelation that disgruntled Oscorp employee, Dr. Curt Connors, was responsible for the attack, Oscorp’s stock has climbed four points.

Oscorp spokesman Douglas Menken provided some details from the meeting, including that the construction on the prototype alternative energy power plant, complete with hydroelectric tower, is on schedule for completion within the next year.

Other highlights included a preview of a flight harness for the military and significant advancements in robotics by the head of the engineering division, Spencer Smythe.

Oscorp personnel dismissed questions regarding Norman Osborn’s health and whether the company’s estranged heir apparent, Harry Osborn, is up to the task of running his father’s conglomerate.

Menken stated, 'Between the disappearance of Dr. Rajit Ratha, the rogue actions of a very unstable former employee and Norman Osborn’s health concerns, everyone in the media will cry the sky is falling, but just the opposite is true. While everyone else ducks for cover, Oscorp is always reaching for the stars.'"