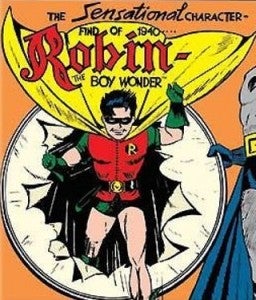 Will Robin be making an appearance in The Dark Knight Rises? The very question raises intense emotion among Batman fans. While only months ago, the very suggestion of Robin appearing drew outraged responses from fans citing anti-Robin quotes from Christopher Nolan and Christian Bale, the tide has started to turn. While fans might not see the classic red, green, yellow, and black costume, many now believe that Robin will appear in some form or fashion. Here are the top five clues that The Boy Wonder will be splashing into The Dark Knight Rises.

Robin Logo In The Stands At Football Game – During one of the first Dark Knight Rises trailers, the Robin logo appeared in the stands at a Gotham Rogues game. Some took this as an easter egg indicating Robin would be in the movie, while others pointed out that it was just the work of a creative extra. Even if the sign was the invention of an extra, Warner Bros. chose to include that scene in the trailer.

Ward On The Back Of A Jersey – Sure the Gotham Rogues player with Ward on the back of his jersey was actually former Pittsburgh Steeler Hines Ward, but Ward was also the last name of Burt Ward who played Robin on the sixties Batman TV show. While it was the player’s name, Warner Bros. chose to highlight the scene showing the name of the player in the trailer, knowing that fans would associate it with the former Robin actor.

John Blake Drawing Chalk Symbols – We’ll call this one the Forbes theory, because Forbes.com was where it surfaced. During one of the trailers, there is a chalk symbol drawn that was first thought to be a bat symbol, but Forbes writer Mark Hughes claimed it looked more like Nightwing’s symbol. Of course, Nightwing is the superhero identity that Dick Grayson adopted after Robin. Hughes also indicated inside knowledge that John Blake draws the chalk symbol throughout the movie and it is a major plot point.

John Blake Is An Orphan – Right from the beginning there has been speculation that Joseph Gordon-Levitt’s character is secretly Christopher Nolan’s version of Robin. When the first trailers hit showing Joseph Gordon-Levitt as a cop, the speculation started to die down. But speculation begin to pick back up when rumors surfaced that John Blake was an orphan, which has now been confirmed by leaked bio information. Of course, Dick Grayson who became Robin was an orphan, which has many speculating that John Blake’s real name might be Dick Grayson.

Because It’s A Tradition To End Batman Franchises With Robin – The first Batman franchise ended with Robin sharing top-billing with Batman in 1997’s Batman and Robin. Why not end Christopher Nolan’s Batman franchise with a Robin appearance?