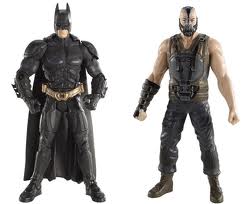 According to a scooper over at Idle Hands (via Comic Book Movie), the identity of The Dark Knight Rises' sixth Movie Masters action figure has been revealed as Batman Begins villain Ra's al Ghul, played by Liam Neeson.

The hyper-detailed action figures, which stand 6" tall, are favorites with collectors and so popular that they have essentially two target groups of customers: those who love the movie they're based on, and those who buy the Movie Masters figures as a collection in and of itself.

Previously-announced Movie Masters figures for the movie have included Batman, Bane, Catwoman, Jim Gordon and John Blake, Joseph Gordon-Levitt's character who is widely believed to be more than he appears on paper. Rumors have circulated that a Movie Masters figure might be released for Marion Cotillard's character as well, since she's rumored to be a much bigger part of the story than the studio is letting on. Buying all of the figures allows fans to assemble a working Bat Signal.