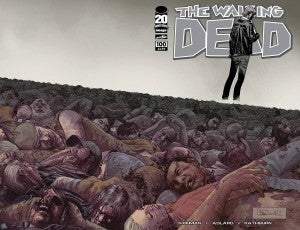 Sources familiar with the order numbers on The Walking Dead have reported to Bleeding Cool that initial orders on July's hundredth issue of the blockbuster zombie survival series will top 300,000 copies--a number that not only guarantees it will outsell all other comics in July but that it will be the largest print run for a single issue comic book so far in 2012.

The article speculates that Avengers vs. X-Men #1 may eventually be the year's top seller after multiple print runs, but notes that the first, massive print run for AvX included massive overshipments to comic book stores, meaning that Marvel was giving them copies which were not ordered and making no money from it. This is not uncommon practice for major big two "event" stories, where the publisher overprints key issues and then ships some of the extras to stores in order to keep it in stock for the benefit of fans who may not have preordered (although Marvel reportedly did it in much larger numbers for AvX than is standard).

UPDATE: Rich Johnston from Bleeding Cool notes in the comment thread, "You got it wrong, I didn't mention anything about overshipment. The books were repeatedly heavily discounted however, with rare variants used to amortise the remaining cost." This reporter had anecdotally heard about overshipments and assumed that's what the article meant when it referred to  "a first print that effectively gave away most of its copies." I apologize for any misunderstanding.

The issue will ship with nine different variant covers, all by best-selling Image artists, which has no doubt increased orders substantially. You can see a gallery of the covers--by Todd McFarlane, Frank Quietly and others--below. Even if you divided up 300,000 copies by those 9 covers, though, the resultant number would be over 30,000, which is twice the 15,000 perceived by many fans to be the "baseline for cancellation" at the big two and thousands more copies than The Walking Dead has usually sold on a month-to-month basis since it was launched. Variant covers are also being used at incentives at next month's San Diego Comic-Con and at the Walking Dead Escape in San Diego that weekend.

Castlevania: How Season Four Sets Up Potential Sequels And Spinoffs

Pokemon Sword and Shield Player Has the Most Unexpected Shiny Encounter

Zack Snyder Shows Off Incredible Army of the Dead Cake