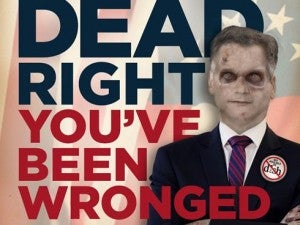 As part of its ongoing viral campaign against DISH Network, who have dropped AMC Networks  as part of a legal dispute between the content provider and the exhibitor, AMC Networks will apparently send an undead candidate to the Democratic and Republican nominating conventions.

"DISH dropped our networks not because of ratings or rates,” AMC Networks said in a statement earlier this year. “In fact, DISH has not discussed rates with us at all. DISH customers have lost some of their favorite shows because of an unrelated lawsuit which has nothing at all to do with our programming.”

According to a representative for the network, AMC is suing Dish for $2.5 billion in damages after DISH dropped AMC Networks’s Voom HD Networks. The lawsuit, filed in 2008, is scheduled to go to trial Sept. 18 in New York State Supreme Court.

According to a new press release made available by AMC Networks, a candidate identifying himself as "A. Zombie" will be appearing with a one-note platform: to return AMC's The Walking Dead to as many televisions as possible. This isn't the first time that AMC Networks has staged a zombie-centric protest against DISH; last month zombies took to Manhattan streets in support of the network.

“My husband is someone who has dedicated his life and his afterlife to bringing equal viewing opportunities to all Americans,” the release quotes Mrs. Zombie as saying. "He’s the right man to lead the fight to bring zombies to everyone in America, and he won’t stop -- even if it kills him, again.”

The A. Zombie for President Campaign is organized by AMC Networks, home to AMC, WE tv, IFC and Sundance Channel. Satellite company DISH dropped these networks earlier this year because of an unrelated lawsuit and is now in the disadvantaged position of being the nation’s only major television provider without these channels and their popular shows.

A one-issue candidate, A. Zombie’s mission is to rally zombie fans around the country who don’t have access to these networks and shows to find an alternative television provider before the highly-anticipated third season premiere on October 14, 2012 of A. Zombie’s favorite show, AMC’s The Walking Dead, the most watched basic cable scripted drama series among DISH subscribers, according to the Nielsen company.

For more information about the campaign, please visit: www.azombieforpresident.com.