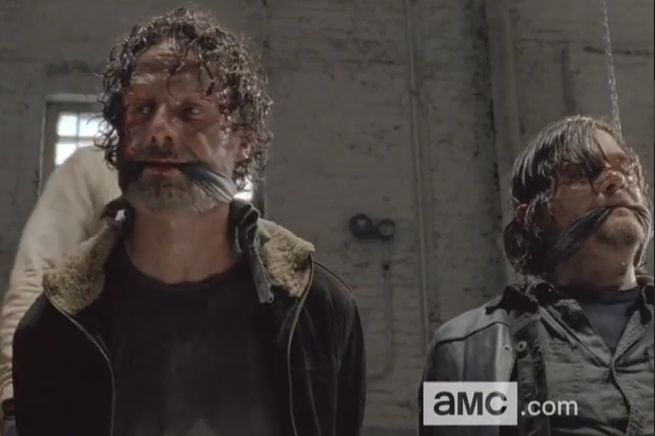 We have seen an early press screening of The Walking Dead Season 5 premiere, and while we’re not allowed to reveal any spoilers, here’s a general overview of what we thought about the episode.

The Season 5 premiere is not an individual or small group character study. It’s a return to the group dynamic, as Rick’s group attempts to survive in a world gone mad. For those that were worried that Season 5 might try to stretch things out at a slow pace, don’t worry. The Season 5 premiere is non-stop action from beginning to end, and more happens in this one episode then happened in all of the last half of Season 4.

And that’s not to make light of the last half of Season 4, as it had some excellent episodes such as The Grove that really journeyed into the soul of the characters. But that journey is over, and the Season 5 premiere is intense. It also contains some of the most violent scenes in the series to date. In particular, there’s one scene that will be torturous to readers of the comic books, and that’s all we’ll say about that.

As far as calling out particular performances, this episode is really a group effort, perhaps more so than any of the other episodes in recent memory. Everyone carries their weight in this episode, and to see all the moving pieces click together is something to behold. However, we will add that Melissa McBride once again shines in this episode. Somebody give that lady an Emmy already. She deserves it.

The episode was directed by Greg Nicotero, who always does a great job directing, but we would say this particular episode is his best yet. At the end of episode, we had to let out a sigh of amazement that Nicotero was able to fit everything he did into a single hour-long episode.