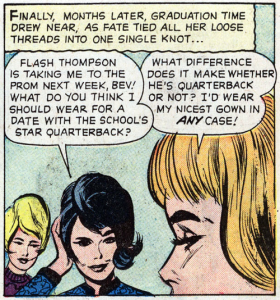 Over the weekend, there was some buzz about Flash Thompson, the longtime Spider-Man supporting character and current wearer of the Venom symbiote who was apparently almost reimagined as a homosexual teen in Ultimate Spider-Man years ago. That, along with the fact that it was series writer Brian Michael Bendis who changed his mind and not pressure from editorial that led to the alteration, came out at Baltimore Comic-Con this weekend and got a lot of people talking about the character--but it's veteran comics writer Tom Peyer whose Tumblr really shed some new light on the origins of Flash Thompson last night. He shared the image at right, with the caption, "High school football star Flash Thompson is mentioned in Teen-Age Romance #85, seven months before his introduction in the first Spider-Man story." While a quick look at Google will reveal that this isn't the first time the mention has been noticed, it's making the rounds a bit, in part because Mark Waid tweeted out the link, noting Peyer's find. While some fans have pointed it out before, it seems as though it's never really broken big in the comics community because it's being aggressively reblogged. The issue in question was written by Stan Lee, who was also Editor-in-Chief at Marvel at the time and has always been credited as Flash Thompson's co-creator (Spider-Man co-creator Steve Ditko also co-created Thompson, who first appeared in the same issue as Spider-Man did), with artist Vince Coletta. Jack Kirby also contributed art to the book, which ended with the following issue (#86, cover dated March 1962).