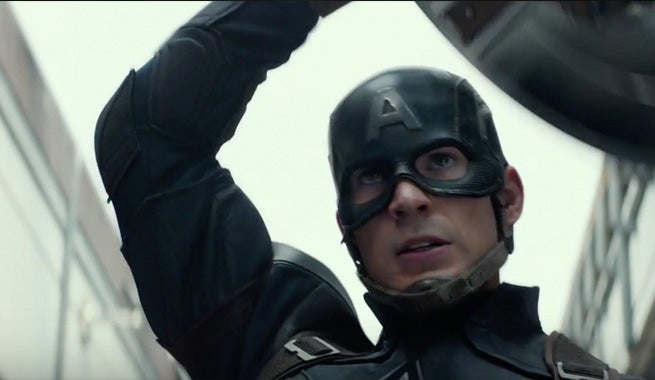 Earlier tonight, the trailer for Captain America: Civil War debuted on Jimmy Kimmel Live. If you haven't yet seen it, check it out right here, and then come back to take a look at the top five moments.

It wasn't easy to narrow the trailer down to its five most epic moments, but we did our best. Let's get started.

Chadwick Boseman's Black Panther is set to debut in Captain America: Civil War, ahead of his 2017 solo film. We've now gotten our first look at T'Challa in live-action.

Not only did we get our first look, but we've seen him kicking some serious butt in his first couple of clips. He lays the smackdown on the Winter Soldier with a drop kick and runs as fast as cars while being chased down. He was said to be neutral but it definitely doesn't look like he'll be an ally of Captain America.

We Used To Be Friends

The dramatic emotional stakes in Captain America: Civil War are going to be higher than any Marvel Studios film which has preceded it.

Hearing the conversation between Tony Stark and Steve Rogers, where Cap apologizes to Tony, saying "He's my friend," only to be told, "So was I," by Tony is a punch right in the feels for all Marvel movie fans.

On top of that, an apparent dead Rhodey looks like a heartbreaker as well.

The lines have been drawn and our heroes are ready for battle.

Not only that, but Scarlet Witch is flying!

The action following these sequences will probably be some of the best Marvel has had to offer since the Battle of New York in 2012's The Avengers. It's literally a super hero showdown of at least eight developed heroes going at it.

It's a great time to be alive.

You remember him from Incredible Hulk, right?

This guy has never been one to support super heroes so it's a perfect fit for him to be the one enforcing the Registration Act. He and Tony also might be buddy-buddy after their bar encounter where Tony tried to recruit Bruce back in that post-credits scene.

Here's to hoping we get a Red Hulk somewhere down the line.

The action in this trailer is second to none. Falcon delivers a flying, spinning double drop kick. Black Panther and Captain America are also fans of a similar move. Scarlet Witch flies...

But none of the moments were as epic as the trailer's finale with Captain America and Bucky teaming up to take on Iron Man in a Hardcore Handicap Match fit for Wrestlemania.

Will this be the best Marvel Studios production to date when it releases on May 6, 2016?