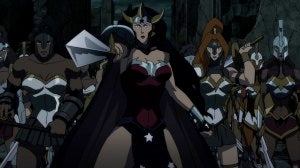 Remember the immediate aftermath of Marvel's D23 leak, when test footage from James Gunn's Guardians of the Galaxy proved to us that, yes, there would be a live-action version of Rocket Raccoon coming soon, and a comics commentator went viral with his observation that somehow Marvel had managed that before Warner Bros. got Wonder Woman off the ground?

The sudden appearance online of an elaborate fan film (see below) based on the character that got a lot of attention for itself with press claiming that Windfall Films (who made it) had "figured out" what Warner Bros. couldn't  with the character in a three-minute short has likely not helped any, but Warner Bros. CEO Kevin Tsujihara wants fans to know that he's aware of the many, many online calls to develop the property and he agrees it needs to happen soon.

In a talk where he addressed the company's overall strategy, Tsujihara said the studio had “huge plans for a number of other DC properties on TV” and that “we need to get Wonder Woman on the big screen or TV,” says The Hollywood Reporter.

Wonder Woman was last set for the small screen a few years ago, when a pilot episode of a new TV series was filmed for NBC with Ally McBeal's David E. Kelley behind it. That movie drew jeers from everybody who saw it and NBC didn't pick it up--or even officially release it, although bootleg copies circulate widely on the Internet and at comic conventions. More recently, a Smallville-style prequel series titled Amazon was planned at The CW, but seem to have been put on the back burner to make room for The Flash.

DC has already had three big, new TV announcements in the relatively recent past, with The Flash being followed up by Gotham and Constantine. To see some of our ideas about where they could go next, check out a related story here.