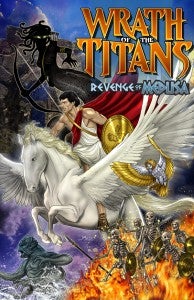 Following the 'if it ain't broke, don't fix it' adage, 'Revenge of Medusa' reunites the original team: Darren G. Davis and Scott Davis as writers and illustrated by Jaime Martinez. The new series features a new villain to test Perseus.

Says Scott Davis: 'How do you challenge someone like Perseus? He's already defeated some of mythology's most dangerous creatures. You attack from within. You find ways to erode his confidence and shake his faith. And in this case, you do it with what made the last series memorable...monsters and Olympian intrigue.'

Color me intrigued. 'Wrath of the Titans: Revenge of Medusa' is out this week. The 2nd issue hits stores the first week of July.