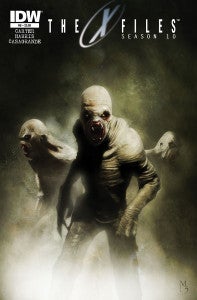 This afternoon on Facebook Joe Harris--author of IDW Publishing's The X-Files Season Ten--teased a number of upcoming developments in the book, including the return of two popular antagonists and more "mytharc" stories to come in the near future.

"It's no secret why Flukeman is everyone's favorite Monster of the Week. This sequel of ours is a thriller, and it's going to gross you the f--- out," Harris wrote to his personal Facebook page.

The two-part story, the first part of which you can see pictured at left, will lead into more familiar territory before Harris says he and his creative team are striking out into uncharted lands by the time the series reaches issue #12.

"After Flukeman, we've got the reemergence of another old favorite character," then more Smoking Man stuff to play with, as well as another big 'Mytharc' five-parter coming up. But our first, original 'MOTW' is lined up for year one too. And I have plans to do more of those, which I'm really excited about."

They'll hardly be the first to create an original new threat for Scully and Mulder in the comics, of course, but the key difference between Harris's run on The X-Files and previous attempts is that Harris's has been critically-acclaimed and is largely being seen as a strong addition to the X-Files canon, whereas the Topps comics and other earlier entries are generally thought to be best left forgotten.

The X-Files: Season Ten's Flukeman story begins in November and concludes in December, with the next, mysterious return slated for the beginning of 2014.