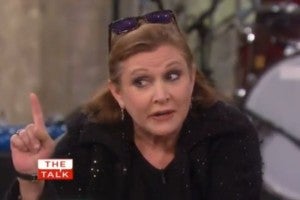 This weekend at the Calgary Comic and Entertainment Expo, veteran actress Carrie Fisher confirmed (for the second time in as many months) that she would be reprising her role as Princess Leia Organa in Star Wars Episode VII--but after having deadpanned a confirmation last time that was later chalked up to "joking," this latest confirmation sounds more sardonic and more ripe for "Come on, people, get a sense of humor" than ever before. "I like being bought by Disney, because they never wanted to buy me before," she's quoted as saying by the Calgary Herald. "I'm glad they are doing a new movie because they are sending a trainer to my house so I can get in really good shape. So I'm really eating a lot of sugar in advance, as you can see. By the time I really get down to it I will have eaten everything." Lest it be unclear that she was treating the whole discussion, held in front of an audience at the BMO Centre, with more than a bit of levity, she also talked at some length about co-stars she had kissed, including Harrison Ford and...Jabba the Hutt. "What was his name? Jabba the Hut? I always get his name mixed up with other boyfriends," she joked. "Oh God,  I loved doing that. You know, they ridiculously asked me if I wanted a stunt double to kill Jabba the Hut. Can you imagine? I got to saw that neck off, it was really, really fun and one of the highlights of my career."

Amazon's A League of Their Own Series Adds Five Cast Members