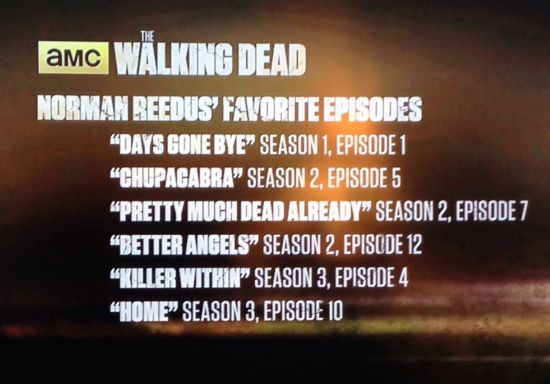 During last night's "Internment" episode of The Walking Dead, AMC shared Norman Reedus' favorite episodes of the series. So what six episodes are Reedus' favorites? He selected one episode from Season 1, three episodes from Season 2, and two episodes for Season 3. Reedus likes "Days Gone By" Season 1, Episode 1; "Chupacabra" Season 2, Episode 5; "Pretty Much Dead Already" Season 2, Episode 7; "Better Angels" Season 2 Episode 12; "Killer Within" Season 3, Episode 4; and "Home" Season 3, Episode 10. What do you think or Reedus' list? Reedus lists the first episode, even though Daryl wasn't in it. He also lists "Chupacabra," which is the episode that Daryl really started to emerge as a fan favorite. In that episode, Daryl saw hallucinations of Merle. Reedus also lists "Killer Within," which is almost on everyone's favorites list. "Killer Within" was one of the most shocking Walking Dead episodes ever with two main characters getting killed off. Andrew Lincoln also delivered an Emmy worthy performance during the episode. In the "Home" episode, Daryl returns to the prison and pulls off an epic, last-minute rescue of Rick, who is surrounded by Walkers. The episode also gives a lot of insight into Daryl and Merle's home life before the zombie apocalypse. The only surprising omission from the list is "This Sorrowful Life," which was the episode where Merle was killed. Reedus delivered one of his most powerful performances in the episode, as he reacted to discovering zombie Merle. Of course, it was likely a pretty intense and tiring episode for Reedus to film, and maybe Reedus didn't want to list an episode where Daryl's brother was killed as one of his favorites.