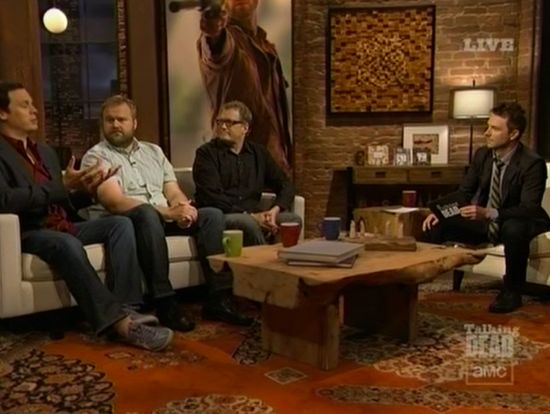 If you don't want to know what happens in The Walking Dead Season 3, be warned that this article contains some minor spoilers. Of course, these spoilers were revealed during the Talking Dead talk show, so you are likely to see them online everywhere fairly soon. Appearing on The Talking Dead with host Chris Hardwick were executive producers Glen Mazzara, Gale Anne Hurd, Robert Kirkman, and David Alpert. Comedian Drew Carey was also a special guest, along with a couple of the cast members. In regards to how things ended with Rick in season two, Mazzara said, "We actually call that the Rick-tatorship, and Rick has to whip that group in shape. There is no safe place to hide, and they have to pull together, and it's his way or the highway." Mazzara added, "I think what Rick has to really worry about is how far can he push these people, and everybody is going to have to step up." When asked why it was important to introduce Michonne this season, Hurd said, "Who doesn't love a kick-ass character with a katana sword?" In regards to actress Danai Gurira, Hurd added, "She's really impressive, and she brings the character to life from the comic book." In regards to her relationship with Michonne in season three, Actress Laurie Holden (who plays Andrea) said, "Well, she saved my life. She's awesome. She's sexy. She's a bad-ass. She's my friend." In regards to actor David Morrissey, actress Laurie Holden said, "Nicest man in the world, incredible actor. I think people are going to be blown away. I think he is the perfect Governor. He is the most authoritative, charismatic, sexy, evil…he's it. He's the Governor." Executive Producer Mazzara elaborated, "The Governor is a guy who believes that this zombie apocalypse is all about him. That somewhere down the road history is going to look back, and there was one guy who kept the light on, who kept humanity going, and he thinks that's him. That's his mission, and he'll do anything to make sure that he's that guy." Mazzara added, "I think he thinks he's the Messiah." In regards to Woodbury in season three, Hurd said, "Woodbury is run by the Governor. When you first arrive there, you think it's fairly normal. It looks like a small town, and it's full of small town people. But if you pry a little more deeply, you'll find there's something rotten in Woodbury." When asked the ratio between walkers and people, Mazzara answered, "It's certainly more walkers than people. We think most of the people are dying off, and now that everybody's infected they're becoming walkers themselves. So over the past two seasons people have been trying to get away from all the walkers, find a safe place, and when the herd overran the farm that's been kind of our idea there's no safe place now. The entire landscape has just been drowned with walkers." Mazzara added, "It's very different this upcoming season. They're everywhere." In regards to what excites him most about season 3, Alpert said, "Honestly, the thing that excites me most is we're going to kill so many people. We're going to kill walkers. We're going to kill people. We're going to kill cast members. We're going to kill people that you care and love, and it's going to be awesome." In regards to Merle, Alpert said, "So first, Merle's coming back. The thing to know about Merle is that with Merle you can never know what to expect. So with Merle, you can expect the unexpected." When asked if Randall and his group were part of the Governor's crew, Alpert said, "There is a lot of reason to suspect that they could have been." 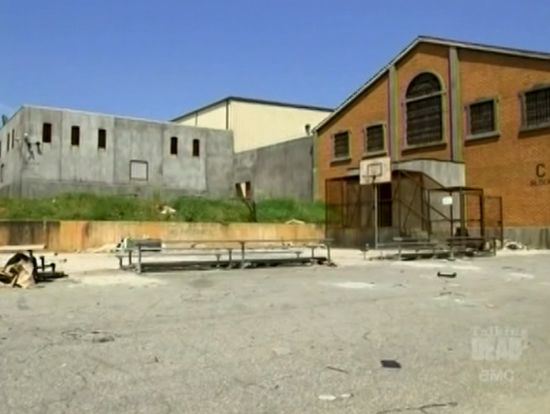 When asked what the prison means for the survivors, Kirkman said, "It means..I think it's a sign of hope. You know there are walls here, and there's structure. You know, there's something that could possible help us survive. I think it's something that's very important to them from those aspects, but I don't think it turns out to be exactly what they expect it to be." Steven Yeun (who plays Glenn) gave Chris Hardwick a tour of the prison set. When asked about season three, Steven Yeun said, "The pace and craziness that was last year's kind of height is the jumping off point, and it's just going to get even more nuts." In regards to the prison, Kirkman added, "It's extremely creepy and really amazing, and more than I could have ever hoped for."