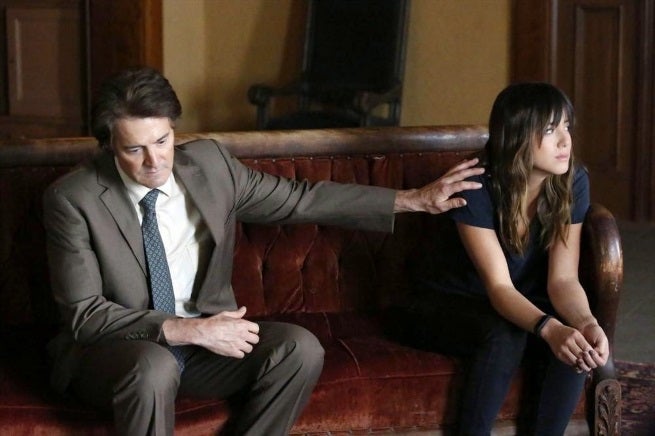 The Hydra planes circle around to attack the Bus. May takes evasive maneuvers, diving deep into cloud cover. They release pods behind them, which are hit by Hydra missiles and explode. They cloak at the last minute, faking the Bus's destruction. They head to San Juan to meet up with Coulson and let him know that Hydra took Skye.

May fills Coulson in. Coulson tells Morse to tell Diego to try to hide the alien city from Hydra. Trip brings Koenig some old, Howling Commandos technology, four manual detonators that should still work in the city.

Simmons and Fitz are discussing Mack's fate. Fitz believes the city's defensive acts similar to the Obelisk, like an immune system that treats unworthy humans as viruses. Simmons wonder if the city didn't kill Mack, but corrupted him instead, making him part of the city.

Hunter finds Morse searching through some of Mack's stuff in the garage. She finds a thumb drive. They discuss what happened, and Hunter assures Morse that it wasn't her fault. Hunter calls Morse out on hiding the thumb drive, but he says he trusts her. Hunter agrees to help her deal with Diego.

Coulson tells May that she made the right call. May is worried about Skye, but Coulson reassures May that Skye has become a competent and capable Agent and can handle herself.

Ward is escorting Skye through a Hydra-guarded house. He says he's not loyal to Hydra, and brings Skye to meet the Doctor. The Doctor seems overcome with emotion upon seeing Skye, despite promising himself he wouldn't. The Doctor introduces himself as Cal, Skye's father. He thanks her for meeting him here, but she points out that she was kidnapped at gunpoint and forced to come. The Doctor says this isn't how he wanted things to go. Skye calls him a murderer and a monster, and he doesn't' deny it. He says he became that when she was taken from him. He says he wasn't always like this. He tells Skye of her birth in China, and that her mother was Chinese. He apologizes for not being able to protect her and be there for her. He says everything that is about to happen is supposed to happen, that this is Skye's destiny.

Hunter and Morse go to meet Diego, but he's early, in a suit, and talking to Hydra. He walks by a slips Morse a piece of paper with an address.

Skye continues to argue with the Doctor, saying she wants to leave and that working for Hydra makes the Doctor a bad guy. He nearly snaps, but holds it together, saying he'd never work for Whitehall, he just needed him to find Skye. The Doctor tells Skye that she's special, gifted, like her mother, that there's a change that has to happen. Skye asks him what happened to her mother. The Doctor says he worked with her at a clinic. Her mother was kidnapped by Hydra sleeper agents in S.H.I.E.L.D., who brought her to Europe. The Doctor followed, but by the time he caught up, Whitehall had carved her up. The Doctor hums a song that Skye's mother used to sing to her as a baby. Whitehall summons The Doctor. The Doctor tells Skye he's going to kill him.

Coulson's team is preparing to go back to the city. Coulson orders the Koenigs to stay behind to operate the Theta protocol if things go bad. Morse calls Coulson with the address Diego gave her, and they find that it's located just over the temple in the city.

Hydra is using a plasma drill to dig into the city. Raina is summoned to meet Whitehall, along with the Doctor and Ward. Whitehall brings Skye in. Ward says he brought her for insurance, but Whitehall says he also didn't blow up the Bus, which is noted by Skye. Whitehall brings out the Obelisk and tells Skye to pick it up. She does, and it glows, and she uses it to kill a guard. Whitehall says he hopes she's as special as her mother. Whitehall puts it together, but can't figure out why Ward is here. Raina says its love. A guard knocks out the Doctor, and puts him, Ward, and Skye under guard.

Coulson's team is getting ready to assault the building where Hydra is drilling, while Trip, Fitz, and Simmons start diving into the tunnel to find Mack, using hazmat suits to keep themselves protected.

Ward is guarded by Agent 33. She is thoroughly brainwashed. Ward relates to it the way he was blindly loyal to Garrett. The Doctor wakes up in front of Skye and Whitehall. Whitehall as attached a crippling device to him. Whitehall tells Skye that her mother didn't age. Coulson and may storm in. Ward begins getting into the guard's head, distracting him long enough for the Doctor to regain his footing and take the guard out. The Doctor leaves Skye and Ward behind, saying he need to take out Whitehall himself.

Fitz, Simmons and Tripp set two detonators, but need to split up to set the last two in time.

The Doctor approaches Whitehall, but Coulson shoots Whitehall before he has the chance. The Doctor is not happy. The Doctor argues with Coulson, until Agent 33 show sup and starts shooting. She's heartbroken to see Whitehall dead. The Doctor attacks Coulson.

Ward frees himself and Skye. He checks the doors and Skye shoots him when he isn't looking.

Skye finds the Doctor pummeling Coulson, and puts him at gunpoint. He backs off. Skye says she's not going through with his plan, not going to the temple. Skye gives him one chance to leave. He agrees, but says once she changes no one else will understand. He says he'll always love her, and calls her Daisy. She runs to Coulson and is so upset by his state that she runs to the Temple to make things right and get the Obelisk.

Agent 33 finds Ward. A vest took the brunt of the bullets. She says she doesn't know what to do now that Whitehall is dead, and helps Ward up.

SKe goes to the basement and finds the Obelisk is gone. Raina has taken it below. She finds Mack. Raina tells Mack to take her to the temple, and he leads.

Coulson and May go to the basement. Coulson goes into the hole, after Skye. Trip's team returns, having set the detonators. May tells them that Fits and Skye went in, and Trip jumps back down, without a suit. Raina finds the temple, with a pedestal standing in its center. Trip begins removing the detonators. Skye finds Mack, and is taken back by his eyes. He doesn't' move or address her. She says she'll come back for him. Skye finds the temple, and Raina with the Obelisk. Raina says the Obelisk doesn't destroy, but it gives life. Raina places the Obelisk on the pedestal. Trip removes the final detonator. The temple begins reacting. Coulson runs into Mack, and Mack attacks, but Coulson gets around him. Trip finds the temple and goes inside before it seals, leaving Coulson outside. The Obelisk opens, and a crystal emerges. Mack finds Coulson outside the temple. A gust of air, or mist, surges out from the crystal. Raina and Skye become encased in something, but Trip is unaffected. Trip kicks the crystal, destroying it, but a shard ends up in is stomach, and he becomes petrified. Skye bursts forth from the cocoon, power radiating from her, and the temple shaking around her. Outside, make seems to have returned to normal, while Trip crumbles to dust.

There is a glowing in a box in a man's study. He opens it and finds an Obelisk glowing inside. A man with no eyes makes a phone call, asks if they've seen this, "someone new." He says to tell the others he's on it.

Agents of S.H.I.E.L.D. Season 2 Episode 10: What They Become Recap With Spoilers