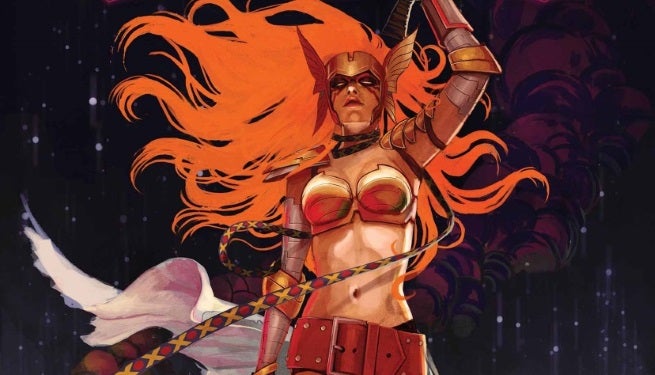 Marvel has released a preview of Angela: Asgard's Assassin #1, the new ongoing series starring the lost daughter of Asgard. The series is part of the Avengers NOW! initiative, and features the creative team writers Kieron Gillen and Marguerite Bennett, and artists Phil Jimenez and Stephanie Hans.

The finest warrior in the Tenth Realm, she has been raised to hate Asgard with every fiber of her being. Training, preparing and waiting for the day when the war between Asgard and Heven would begin again. But following the events of Original Sin: Thor & Loki –The Tenth Realm, she must confront her true lineage. She is Odin's daughter. Thor's sister. Asgardian…

"The story is Angela is basically on the run," says Kieron Gillen in an interview with Marvel.com. "It gives her a chance to interact with a lot of different people so by the end of the first arc we really get a sense of who Angela is vis-à-vis the Marvel Universe. You get a sense of who she is and where she fits into the larger picture."