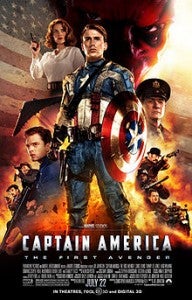 It's fitting that the Chris Evans' starring Captain America: The First Avenger relies so much on symbolism and patriotism as a starting point for the main action of the story. Looking at this contemporary America we see politicians, interest groups, military groups and pundits each establishing positions on American missions, values and what it means to be brave and heroic. So much of Captain America works because of its tendency to be smart in the underpinnings of what Captain America, the man, means to a nation, even now, seventy years after his creation at the hands of Joe Simon and Jack Kirby. Director Joe Johnston capably handles some mighty symbols, and overall this origin film works on a number of levels, with only minor flaws in character use and the predictable love story. The story opens in similar fashion to Marvel's earlier summer blockbuster Thor, with a "how did we get here" feeling. Cap's shield is discovered in ice in the modern day and from there we are sent back to the gritty era of World War II, where young, scrawny, asthmatic Steve Rogers, capably played by Evans, goes through multiple attempts to break into the military. His desire to serve his country is palpable, and each attempt and subsequent rejection only deepens his resolve and depresses him simultaneously. While Steve attempts to get his foot in the door of the Army, on the other side of the world, The Red Skull, played with calculating skill and cool by Hugo Weaving, is attempting to break off Nazi research branch HYDRA from the rule of Hitler to use an ancient Norse weapon against the world. The film is deeply steeped in Marvel lore and iconography, and it's almost strange that this film came after Thor, as it certainly touches on tones and ideas used in that earlier film. As Red Skull continues to build HYDRA up, back in the US, Rogers gets selected for an experimental program designed to build a new group of super soldiers. His selection comes after several displays of bravery and ingenuity, much to the chagrin of Tommy Lee Jones' Colonel Chester Phillips. After some heroics in the wake of his transformation, the movie takes a turn as Captain America becomes a symbol of war bond purchases, volunteerism and patriotism, not a soldier out on the front lines battling Nazis. The movie surprises here, as it touches on the sometimes strained relationship between the politics of war and the politics of patriotism. Evans shows his frustration here in this costumed role, a role that could be useful on the front lines of battle. HYDRA and Red Skull continue their advance, and it's here that the film starts to not only embody a fast-paced, comic book action, it also develops Captain America into the amazing hero he becomes. A daring rescue in enemy territory gives not only a taste of the Red Skull/Cap showdown, but also establishes the heroism and selflessness central to the role of the premiere patriot. While Rogers rise from awkward and scrawny recruit to brave and confident man in charge of a small army is a bit fast and rushed, but for the film's shift to action in the mid to late parts of the story it makes sense. The story keeps developing quickly from there, building to the showdown between Red Skull and Cap. The final battle doesn't do justice to the long established hatred between the two old foes, but a glimpse at their power is evident in the battle. A jump to modern day rounds out the film, with an expected but always welcome guest closing things. Despite some minor glitches, such as an unnecessary spark of predictable romance between Steve Rogers and Peggy Carter, a no-nonsense officer who more than holds her own in the film's action shots, the film succeeds. Hugo Weaving as the Red Skull is underused, as he adds the appropriate amount of evil and steely calm to the role as an underling to Hitler, but when he is on screen he is in command. Overall the film succeeds as not only a great comic book movie, but a action-packed stunner with surprising depth and thought.