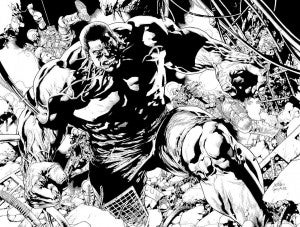 has debuted the first interior art for the forthcoming Marvel NOW! title The Indestructible Hulk by Mark Waid and Leinil Yu. Yu, who was reportedly not entirely happy with the cover art released initially, now has a chance to share a piece of his own and comes out with a splash of Hulk--with a short, almost military-style haircut--stalking through rubble with a group of soldiers in tow. "With Marvel NOW! a lot of us said, 'let's not hold anything back,'" series editor Paniccia said in an interview. "Let's see if we can do something that hasn't been done before. Last time we saw Hulk with armor was during 'Planet Hulk.' But that was on a world where he could be fatally injured by gladiators with rivaling super strength. This time we said why not try something that's built with a more deliberate purpose in mind? And what could the story be behind it? I did a very quick sketch and sent off to Leinil to elaborate and he came back with all these cool options. Writer Mark Waid has an incredible plan for rolling out the armor." According to Newsarama, the relaunched title will see Hulk join up with S.H.I.E.L.D. and conduct clandestine operations for the organization. "I don't think Jason left easy shoes to fill, but Mark Waid takes Hulk and Bruce Banner on a new action-packed journey that is a bit more optimistic," Paniccia said. "Don't get me wrong, it's got some great mysteries and has a few very dark holes to explore but we evolve the Banner/Hulk relationship to a new status quo and I think that new and faithful Hulk fans are gonna love it!" INDESTRUCTIBLE HULK #1 MARK WAID (W) • LEINIL FRANCIS YU (A&C) Hulk – Indestructible force more weapon than man. Banner – smartest man alive. Combined they are the Strongest, Smartest Weapon on the planet! And NOW! the INDESTRUCTIBLE HULK is an Agent of S.H.I.E.L.D.!