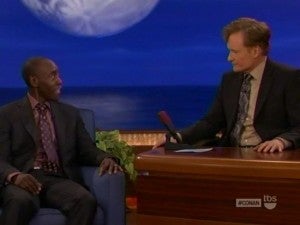 Tonight on Conan, ComicBook.com sadly didn't get a shout-out like we did last night...but Marvel was well-represented, as Conan O'Brien's top guest was Don Cheadle, who plays Rhodey in the Iron Man franchise. It wasn't long before O'Brien, who has been to Comic Con and New York Comic Con in the past, asked Cheadle about his experiences at the pop culture events. "I have been to Comic-Con and it's a level of insanity that you can't imagine," said O'Brien, adding that he couldn't imagine being there with something that had the expectations of the Iron Man films. "It's very intense; you know you want to do well there. If you don't, you're going to hear about it," Cheadle said, reminding O'Brien of the year that a Harry Potter cosplayer assaulted another fan with his wand. "He's a superstar; he's like Mick Jagger at Comic Con," Cheadle said of Robert Downey, Jr. "It's something to watch; he's a real conductor. He completely takes control. In the movie, there's a moment at the end of the movie where he snatches off his glasses and the voice-over says 'I am Iron Man,' and you're like 'You f---ing are Iron Man!'"