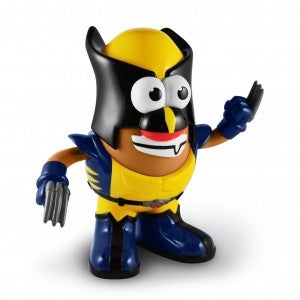 In 2013, three Marvel Comics heroes will hit the big screen with their own solo films, in the form of Iron Man 3, The Wolverine and Thor: The Dark World. Those three characters also share another commonality--they'll all be hitting toy store shelves as costumes for Mr. Potato Head. There will be more Marvel characters to come, but these first three are pretty adorable--and well-timed. The real question, of course, becomes whether it's now considered murder for Wolverine to use his claws to peel and slice potatoes. From the press release: 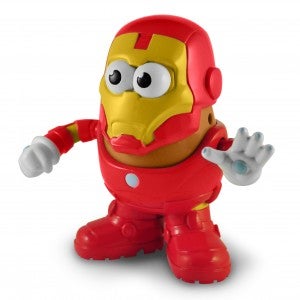 Under license from HASBRO INC. and MARVEL ENTERTAINMENT, PPW TOYS is launching a line of MR. POTATO HEAD figures wearing the costumes of the beloved MARVEL Super Heroes!  These unique collectible- toys will initially be previewed at the upcoming NY Toy Fair in February. Although several Marvel characters have already received the MR. POTATO HEAD treatment by HASBRO (Spider-Man and Iron Man), the PPW TOYS line of figures is targeting fans and collectors. 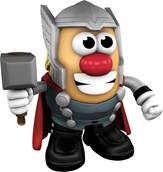 Like other co-licensed Spuds developed from PPW Toys, the new Marvel line is being designed with collectors in mind from the start.  The attention to detail, scale and consistent design elements will make these a must-have for both MR POTATO HEAD and MARVEL fans of all ages.  The Spuds are fully-functioning collectible toys with a variety of fun components to mix and match, or collectors can proudly display them thanks to their compact size and design intricacy. The line-up for 2013 includes WOLVERINE, IRON MAN, and THOR and the line will be available at specialty retailers and e-tailers starting Summer 2013.