In a bizarre and/or disturbing story that came our way via i09, a Marvel Comics fan was recently asked to deboard a United Airlines plane for wearing clothing that, in part, featured Marvel's Black Panther character.

The passenger (identified as freelance E-sports journalist, Amanda Stevens) was boarding a United flight headed for Chicago, when she was confronted by a United attendant who felt her shirt was an issue, because it displayed the American Flag upside down. Stevens allegedly complied, turning the shirt inside out, but the problem continued aboard the flight, when Stevens was approached by a flight attendant and was allegedly told that her hat (a throwback design to classic Black Panther) was making the pilot "uncomfortable." This led to a heated exchange with the attendant, which led to Stevens being asked to deboard the flight.

Stevens deboarded as asked, and as of the latest update (3:53pm EST on 10/12/16) was left standing waiting for United personnel to re-book her flight, with United employees allegedly refusing her assistance, instead sequestering themselves in the employee-only area.

Now, some fun facts about this crazy anecdote:

Regardless of who Amanda Stevens is, it's safe to say that what's happening here is disturbing on a lot of levels.

Clearly the A$AP Rocky logo shirt is no stranger to controversy, but it's not a flight attendant or pilot's job to impose their personal tastes or bias on a paying customer who is otherwise not disrupting the flight. Some may try to argue that Stevens' reaction to the attendant was wrong, and deserved being asked off the flight - but again, having already disrobed once in compliance, and being asked to do so again, would pretty much agitate any red-blooded American who has ever heard of The Constitution. 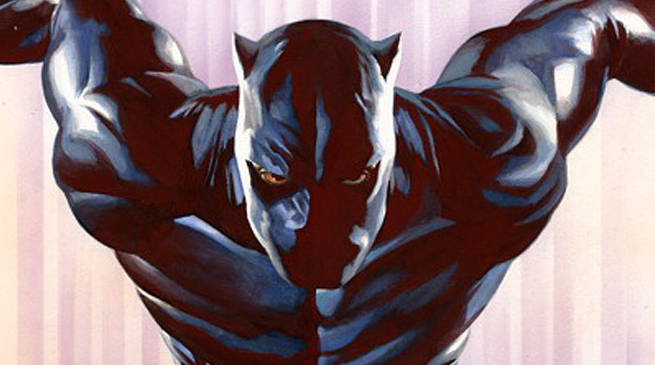 The more insidious undercurrent to all this becomes more visible when one tries to get inside the mind of the pilot and flight attendants. As stated, the combination of a black shirt with an upside down flag and a cap that read "Black Panther" most likely conjured a racially-themed and politicized objection from the United personnel. At a time when race is once again at the forefront of our social discourse, this looks like a suppressive move, at best - and a prejudiced one, at worst.

So far, Amanda has simply tried to make it Chicago as scheduled, in order to complete her work. She's refrained from making too many statements to the media (including Comicbook.com), but the story is definitely gaining legs.

Meanwhile, for Marvel, this situation may present a tricky balancing act. The Luke Cage Netflix series has already courted a certain amount of "controversy" for simply having a mostly black lead cast, and exploring issues almost exclusive to the African-American community; if that's an issue, there's no telling what the actual Black Panther movie coming our in 2018 is going to have to face, in terms of backlash. Maybe Marvel needs to start releasing featurettes now, separating the character from the political organization.

...Or not, since, you know, it shouldn't matter which version of the Black Panther we're talking about.

Check out Amanda Stevens' ordeal for yourself, in the tweets below:

Dear @united this shirt shouldn't make your pilot uncomfortable enough to warrant having me spoken to and told to take it off pic.twitter.com/AHNU3pZxLC

And now I am being told I can't wear my hat @united this is unreal and fucking racist pic.twitter.com/338GyYDa97

The pilot feels "uncomfortable" @united I didn't know he has to look at me while he flies. I feel uncomfortable having a racist pilot

Kicked off the flight